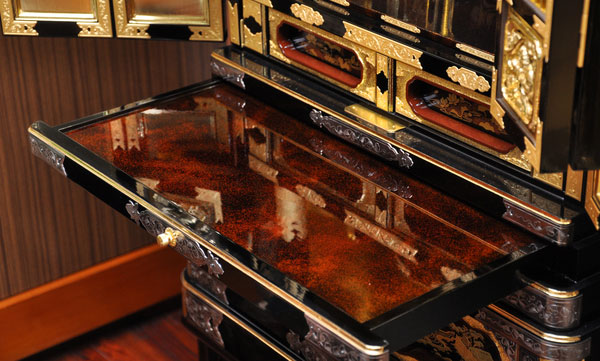 An aura of magnificence and grace
Subtle, profound and traditional art

What is Sanjo Buddhist altar ?

Sanjo Butsudan are Buddhist altars made in the Sanjo area, Niigata prefecture. They are golden altars with well-established characteristics of elegance and dignity. Sanjo Butsudan is characterized by the orthodox design of an inner sanctuary, quality handcrafted metal ornaments and exquisite urushi lacquering. The inner sanctuary design called kuden-zukuri is imitative of temple architecture, and Sanjo Butsudan are designed after the head or branch temples. Prospering as the hub of hardware industry, Sanjo City made use of their honed techniques to produce ornamental fine metal for altars, delivering metal ornaments peerless in finished quality. Sanjo Butsudan adheres to the orthodox design of an inner sanctuary as with Kyo Butsudan, adopting the hozogumi assembly where wooden base parts are tenoned without nails, and the beam running between the columns called nageshi are either yumigata nageshi, shaped like a bow, or warabigata nageshi, shaped like a bracken. The masugumi (square framing) or hijiki masugumi (square framing using bracket arms) technique is used in building the inner sanctuary.

The Sanjo area, also known as "The capital of Buddhisim" has always been strongly associated with Buddhism. Once renowned for hardware production during the early Edo Period, Sanjo transformed itself into the center of Buddhist altar production in the mid-Edo Period following the aggressive construction of large temples. Honjo-ji Temple was built as the grand head temple of the Hokke sect in 1299, and especially the building in 1690 of the Sanjo Betsuin (branch temple) of the Shinshu sect Otani School, known as Higashi Betsuin, drove the city into brisk altar production. A number of local artisans from Sanjo were engaged in the construction of Sanjo Betsuin under the guidance of carpenters specialized in building shrines and temples summoned from Kyoto. After this, the Jodo Shinshu sect became widespread, and production of Buddhist altars started. The Shinano River enabling smooth transportation of raw materials was another reason why altar production moved into high gear.