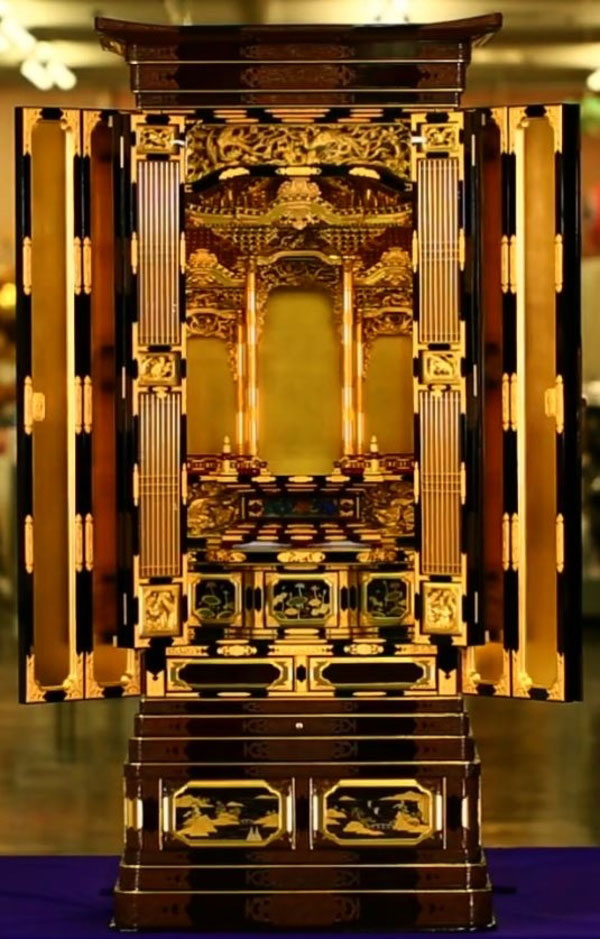 What is Nagaoka Buddhist altar ?

Nagaoka Butsudan are Buddhist altars and altar fittings produced in and around Nagaoka City, Niigata Prefecture. Using traditional techniques that were developed in the 17th century, they are also actively producing innovative designs that suit a modern home. With a western furniture style that allows installment in a house with no alter room, the new Nagaoka Butsudan are popular for its handmade warmth and dignified presence. Nagaoka Butsudan is characterized by its inner sanctuary, Mitsuyanegata kuden. A Buddhist altar is made to resemble the main hall of a temple, and is equipped with a stand called shumidan on the center top, and inside the shumidan is the inner sanctuary called kuden where the Buddha statue is enshrined. A roof of the inner sanctuary is tailored to the designated style of each sect. Featuring the eclectic mix of the double roof structure for the Higashi Hongan-ji Temple and the single roof structure for the Nishi Hongan-ji Temple, Nagaoka Butsudan boasts a gorgeous triple roof. Kara hafu, a rising arch shaped roof, with triangular shaped gables called chidori hafu, is set in the middle, and on both sides are kara hafu roofs. Nagaoka Butsudan is well-designed to separate the pedestal from the main altar body, allowing easy assembly and disassembly in refurbishment to maintain it in good shape even years later. This is a Buddhist altar that will be handed down through many generations by virtue of the unique structure.

The beginning of Nagaoka Butsudan is said to be in the 17th century, when a number of artisans with adept craftsmanship in sculpture and urushi work, carpenters specialized in building temples and shrines called miyadaiku and artisans specialized in making Buddhist images called busshi, gathered and settled in and around Nagaoka City. The construction of Buddhist temples and shrines can only be done under good weather conditions. As Nagaoka and its neighboring areas have a long winter and heavy snowfall, artisans were unable to work during that time, which is believed to have prodded them to engage in altar production as a side business. In the 19th century, the Nagaoka clan, which ruled over the land of Nagaoka, implemented a policy to protect the Jodo Shinshu sect. As a result, enshrining the family memorial tablet called ihai at every home became a custom, and the demand for Buddhist altars increased. In this way, Nagaoka Butsudan established an impregnable position as a local industry.