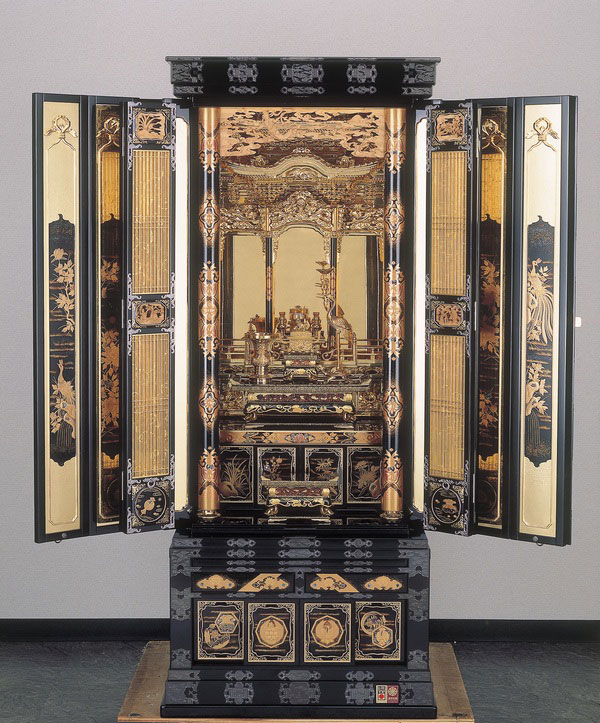 What is Kanazawa Buddhist altar ?

Kanazawa Buddhist Altars (called Kanazawa Butsudan in Japanese) are made in Kanazawa, Ishikawa prefecture. In the past, Ishikawa was an incredibly wealthy province called Kaga. This wealth was reflected in the rich Kaga culture of luxurious crafts still produced to this day. Kanazawa Buddhist Altars gained national recognition as a traditional craft in 1976 and has a splendid style, rich with artistic maki-e techniques. All the pieces of the Buddhist altar, such as front pillars, center pillars and back of the door panel, are adorned with beautiful maki-e decorations using techniques such as migaki maki-e and taka maki-e. Other unique features of this craft include a curved beam called uneri nageshi under the transom, a paper door mounted on a rotating shaft, rounded ebony wood sculptures, and coral or ivory inlay. As Kanazawa is renowned as the main producer of gold leaf within Japan, they are capable of procuring high quality gold leaf easily. This is why they are able to use a sufficient amount of good quality gold leaf in Kanazawa Buddhist Altars.

The history of Kanazawa Buddhist Altars is thought to date back to the late 17th century, when the lord of the Kaga domain (Ishikawa prefecture), Toshitsune MAEDA, gathered a number of artisans from Kyoto and Osaka and established specialized workshops to produce various artwork and crafts in Kaga. There were twenty three workshop categories, including maki-e, lacquer work, metalwork, paintings, inlay, and sword making. The produced pieces were given to the shogunate, noble family and temples, as gifts and donations. The workshops produced many talented artisans, and many were subsequently involved in Buddhist altar production using the techniques developed at the workshops. The Kaga domain had strong ties with Buddhism dating back to 1471, when a prominent priest of the Jodo Shinshu sect, Rennyo, established a temple in Awara, Fukui prefecture, propelling the Jodo Shinshu sect of Buddhism into widespread popularity throughout the whole Hokuriku region (including Ishikawa prefecture). After the religious reforms of the Tokugawa shogunate* during the Edo period (1603-1868), many households set up Buddhist altars at their homes. Kaga domain had an advantage for altar proliferation compared to other areas.

*The Tokugawa shogunate is the feudal military government that was in power during the entire Edo period. 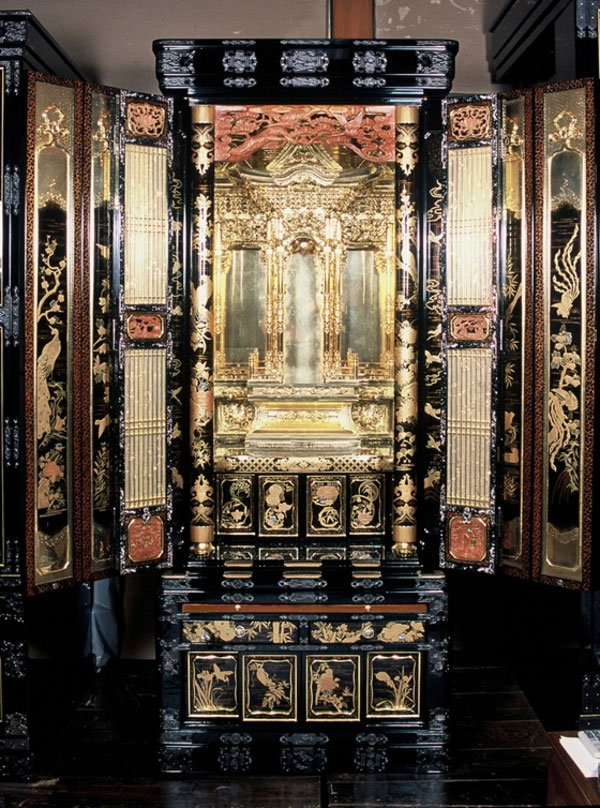