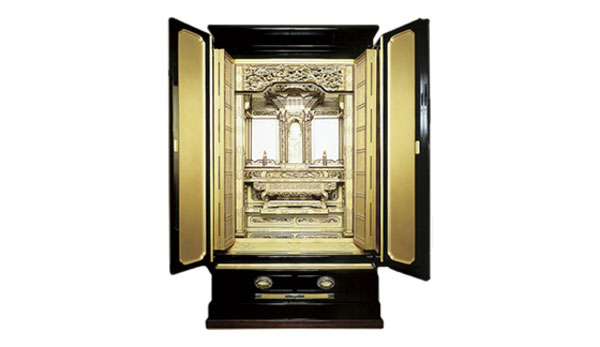 Long history and unchanged traditions
of the splendid gold lacquer

What is Osaka Buddhist altar ?

Osaka Buddhist altars (called Osaka butsudan in Japanese) are produced in the cities of Osaka, Yao, Higashiosaka, Sakai, and Kishiwada in Osaka prefecture. Along with the standard lacquer-painted, gold-leafed altars, this region is also known for production of karakimeiboku altars which utilize the woodgrain patterns of imported wood. This craft uses the technique called taka maki-e which is when maki-e design patterns* are raised with lacquer in a relief design to make it look as if it was decorated with metal ornaments. As the relief patterns do not require nailing, the altar wood does not get damaged. This craft also uses gold-leafed pillars, carved and colored wooden decor, and Buddhist sect-designated metal ornaments on the front of the door. In 1982, Osaka Buddhist altars gained national recognition as a traditional craft for its exceptional techniques.
*Maki-e design patterns are made by using a fine brush to paint a picture with lacquer on a surface, and then sprinkling gold powder on the surface before it dries.

Buddhism has long been deeply linked with Osaka since scriptures were brought in the year 552 when six artisans, including Buddhist statue sculptors, carpenters and craftsmen, moved from the Paekche Kingdom (Korea) to Naniwazu (now the city of Osaka). Four more specialists were invited from Paekche when Prince Shotoku (574-622) built the Shitenno-ji Temple in 593. The artisans and specialists settled and brought the production of Buddhist altars and fittings, which is believed to be the origin of Osaka Buddhist altars. In 1496, a surrounding town developed with the construction of Ishiyama Hongan-ji Temple in Osaka which then led to the expansion of Buddhist altar and altar fitting production. The policies of the Tokugawa shogunate (feudal military government) in the Edo period (1603-1868) also pushed Buddhist altars into widespread adoption, making Osaka Buddhist altar production a stable industry. Colorful Buddhist altars adorned with maki-e designs and a paper sliding door made by Buddhist statue sculptor Ikedaya Yakichi KOBAYASHI during the years 1781-1788 in Noninbashi (today Chuo ward, Osaka) are said to be the original form of this craft.