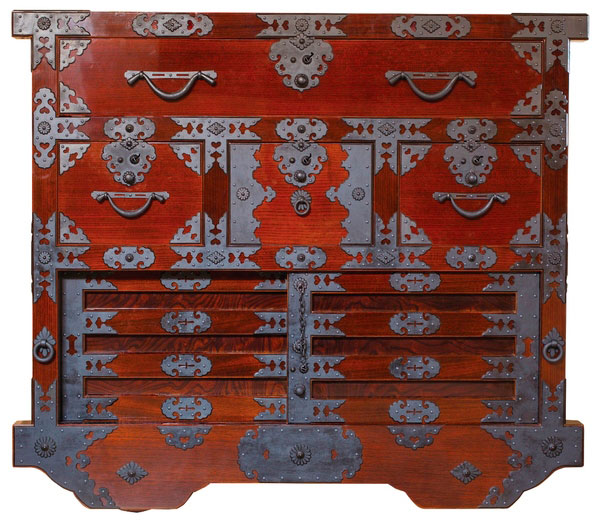 What is Echizen traditional chest ?

Echizen Tansu are lacquer coated chests of drawers made around Echizen City and Sabae City of Fukui Prefecture. They are mainly made of Japanese zelkova and paulownia, and decorated with iron fittings and lacquer. Japanese zelkova is a hard wood with excellent durability and a beautiful wood grain, and paulownia has long been valued as a premium material for luxury chests of drawers as it is moisture resistant, and less prone to cracking and warping. After the wood is naturally dried, the wooden parts are assembled without using nails. This joinery technique increases the strength of the chest and is used to assemble wakugumi (framed) tansu and itagumi (board-assembled) tansu. Natural urushi lacquer is used for lacquering, and there are three different ways of lacquering: fuki-urushi brings out a simple texture, shunkei-nuri is using a transparent lacquer which brings out the beauty of the natural wood grain, and roiro-nuri is using a deep glossy black urushi lacquer. Echizen Tansu are renowned for their massive solidity, and the wood develops rich patina by being used over the years. The heart shaped protective fittings attached to the corners called inome are charms against evil spirits. These unique fittings are also an attractiveness of Echizen Tansu. 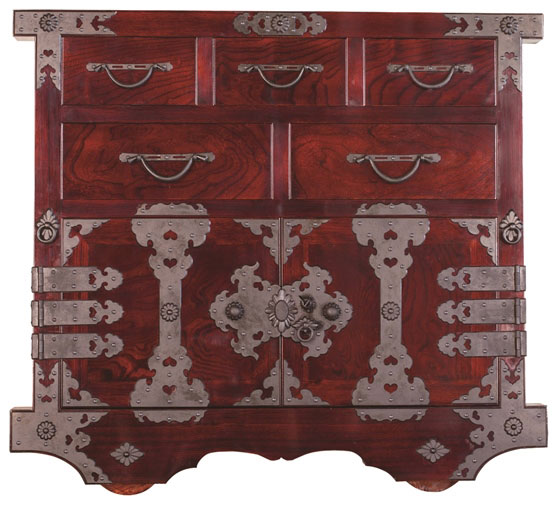 In the 7th century, an area known as Koshinokuni extended from present-day Fukui Prefecture into part of Yamagata Prefecture. It also included Noto and Kaga in Ishikawa Prefecture which are areas known for producing urushi. In addition, as the area around present-day Echizen City was the political center of the region, many cultures and technologies gathered in this area. Koshinokuni was naturally a gathering point for administrators, artisans and merchants as seen during the Muromachi and Warring States Period, when the magistrate's office of the Asakura family was located there. Cabinetmakers or joiners called sashimonoshi in Japanese, made tea utensils for the family, and sashimono workshops prospered in this commercial center. When Tomimasa HONDA became the feudal lord in the Edo Period, he gathered a variety of skilled artisans to develop the town, including those that were skilled in wooden joinery, urushi lacquering, and metal fittings, which resulted in establishing the base for a flourishing Echizen Tansu industry. By the mid-Meiji Period, professional tansu artisans played an active part in the commercial life of the region, and in Echizen City, there is still a street full of joiners and furniture stores. 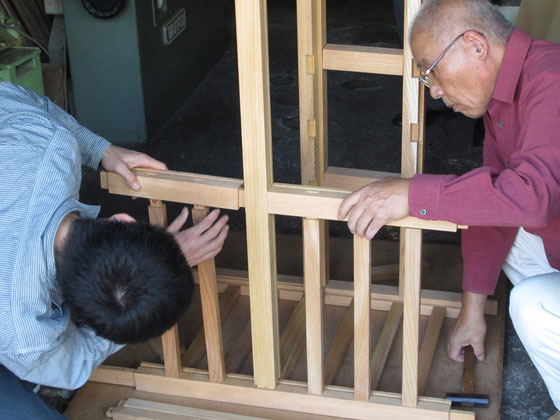