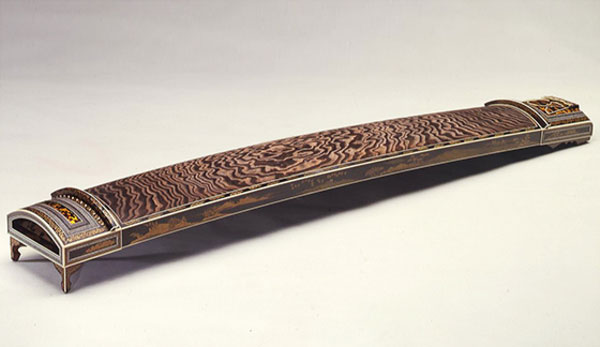 The only musical instruments designated as a traditional craftwork
Beautiful grain, magnificent decorations and superb tones

Fukuyama koto is a Japanese harp, koto, produced in Fukuyama, Hiroshima prefecture. Most of the koto produced in Japan are made in Fukuyama, which is where the coastal view of the city inspired one of the most well-known koto songs, Haru no Umi (Spring Sea). This instrument is distinguished not only for its superb sound, but also for its magnificent decoration and beautiful wood grain. High quality paulownia wood is used by skilled craftsmen, and this craft is reputed to be the best koto made in Japan. Fukuyama koto is the only instrument in Japan designated as a traditional craft. The inside of the main body is carefully carved with repetitive patterns, which improves the sound quality. One of the common carved designs is a hemp leaf pattern, which is often found on high-end instruments. A technique called maki-e, using a fine brush to paint a picture with lacquer on the surface of a piece, then sprinkling gold powder on the design before it dries, is an important lacquerware technique for decorating this craft. The side parts of the koto are decorated with maki-e, adding an elegant and delicate touch.

The history of Fukuyama koto dates back to the early Edo period (1603-1868), when Katsunari MIZUNO, a cousin of Ieyasu TOKUGAWA*, built a castle in Fukuyama, former Bingo province (now Hiroshima). Fukuyama became a wealthy castle town with the support of successive feudal lords of the Mizuno, Matsudaira, and Abe families, and traditional Japanese music performance was very popular. At the end of the Edo period, a koto master named Koto KUZUHARA, received praise for introducing the Kyoto's playing style and music to Fukuyama. Demand increased for this craft because of its excellent sound and value as a traditional craft. Fukuyama koto became known as the epitome of a high-end koto. In the early Meiji period (1868-1912), full-scale industrial production started, followed by efforts to improve the manufacturing processes, and the region established its position as Japan’s leading production center. By around 1970, about thirty thousand koto were made every year, but this has dropped to around three thousand now. The production area manufactures lightweight and easy-to-handle koto without compromising the quality, and hosts national koto music competitions for elementary and junior high school students, to keep the tradition of koto playing alive. On June 6, Music of Japan Day, a commemoration for koto that have been used in concerts or practice for many years is held in Tomonoura, Fukuyama.

*Tokugawa founded the Tokugawa shogunate, the feudal military government in place during the entire Edo period.