What is Miyajima woodwork ?

Miyajima Woodwork (called Miyajima zaiku in Japanese) are woodwork products made in Miyajima, Hatsukaichi, Hiroshima prefecture. Miyajima Island, one of the Three Views of Japan*, has long been nicknamed the "Island of Gods", while Hatsukaichi is a collection and distribution center of timber which makes procuring quality materials for a local woodworking industry easy. This craft has a careful finishing process in which pieces are dampened with water to purposely make the wood grain stand out before they are polished. Their rice paddles are notable for the scent of wood not transferring to the rice, with minimal rice sticking to the wood, and the region boasts the highest production output of rice paddles in Japan. Other crafts made by wood turning include round trays and tea cup saucers. There are also wood hollowed square trays. Ornamental designs of landscapes or flowers on trays, screens, and pillars are carved on the surface of trays, screens and pillars. These carvings are called Miyajima bori. Lacquering is kept to a minimum to bring out the warmth and emphasize the beauty of the wood grain.

*The Three Views of Japan or Nihon sankei are the three most celebrated scenic sights in Japan. 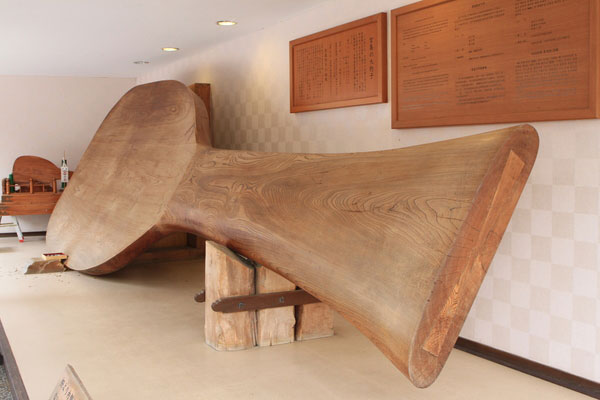 Miyajima Woodwork was first made by a Buddhist priest named Seishin around the year 1800, when he was inspired to design a rice paddle from the shape of a Japanese lute held by Benzaiten, a beloved local goddess of eloquence, music, and art. Seishin then taught the Miyajima residents the techniques of rice paddle production, which were then sold as souvenirs. Due to their high quality, the wood paddles sold well and became popular, which revived the local economy and aided the impoverished islanders. Around 1850, the technique of wood turning was brought to Miyajima and expanded the woodworking industry with the production of round trays and cup saucers. Also, a wood carver from the Koshu region (Yamanashi prefecture) named Shoshai HAKI introduced carving techniques. This increased the ornamentation on the wood pieces, attracted considerable attention, and became known as Miyajima bori (carving). By 1910, the woodwork techniques developed in Miyajima were respected so much that nearly three hundred lathe turners from all over the country gathered in Miyajima to refine their skills and learn the advanced wood turning techniques.