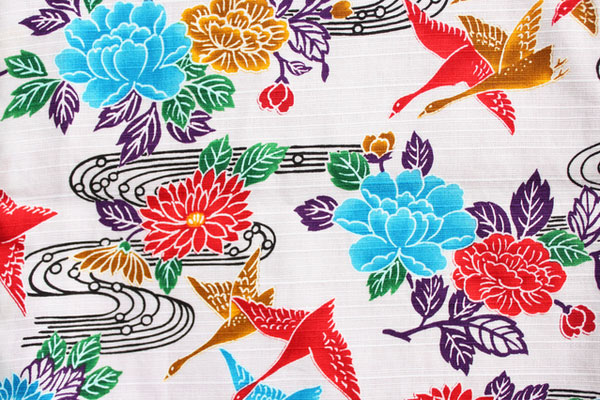 What is Ryukyu traditional textiles ?

Ryukyu Bingata is a dyed and woven textile produced around Shuri, Okinawa prefecture. Its origin goes back to the 14th to 15th century. The ladies of the royal family or the families of the warrior class wore Ryukyu Bingata. There are two kinds of patterns for Ryukyu Bingata. One is a brightly dyed pattern called bingata and the other is an Indigo dyed pattern called aigata. There are also different dyeing techniques. Katatsuke is a technique that uses a paper pattern and tsutsuhiki is a technique that uses free-hand drawing. Katatsuke dyeing is used for a standard length of material used in a kimono known as kijaku, and obi belts while tsutsuhiki dyeing is used for various products including tableau curtains and wrapping cloths called furoshiki. The characteristics of Ryukyu Bingata are its rich colors and bold color combinations unique to tropical places. Patterns vary from classic patterns to modern designs, as well as many patterns that do not exist in the environment of Okinawa. There are a number of classic patterns in particular that distinctively show the influence of mainland Japan, China and Southeast Asia. Ryukyu Bingata with its bright colors has been handed down through generations and is a textile full of mystery that blends in with the natural environment of Okinawa.

There is no clear record of the origin of Ryukyu Bingata, but there is a description which is thought to be about Bingata in the documents written in the 14th century that confirms its existence at that time. The Ryukyu Dynasty was bustling with trade as a relay point in the East China Sea in those days. The trading areas for the dynasty were not only limited to the neighboring countries of Japan and China, but stretched as far as Southeast Asian countries as well. For this reason, dyeing techniques were brought back from China, India, Indonesia and other countries through trade. After assimilating these techniques from abroad, the dyed and woven textiles unique to Ryukyu were developed. It is believed that Ryukyu Bingata was created in such an environment.
Ryukyu Bingata was protected by the Ryukyu Royal government and became a valuable article of commerce as one of the superior quality Asian textiles. It is also said that Ryukyu Bingata was presented to China and to the Edo Shogunate. Materials, patterns and colors varied according to age, gender or social class.
Okinawa was severely damaged by World War II and many of the Bingata patterns and tools were destroyed. However, intense efforts were made during reconstruction after the war, and once again Okinawa Bingata has continued to be a protected traditional dyed and woven product of Okinawa.