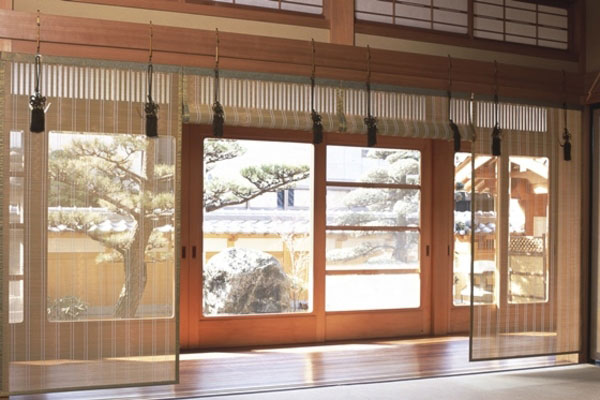 What is Osaka bamboo screens ?

Osaka Kongo Sudare are bamboo blinds produced in the cities of Tondabayashi and Kawachi-Nagano in Osaka Prefecture. Tondabayashi City lies at the foot of Mt. Kongo, the highest mountain in Osaka, and good quality Japanese timber bamboo growing naturally in the area provide the raw materials for this local industry. The elegant and refined blinds made of natural bamboo are used as interior items that create a beautiful and gentle Japanese atmosphere. The industry continues to grow as they are very much appreciated as high-class interior fittings that match with the interior designs of modern households.

The history of bamboo blinds in Japan is considered to predate the 7th century, as the word sudare is mentioned in the Manyoshu, the oldest anthology of Japanese poems in Japan. The history of Osaka Kongo Sudare dates back to around 1700 in the early Edo period when the samurai made baskets and taught the villagers in Shindo Village (present Wakamatsu Town, Tondabayashi City) their skills. They added techniques of bamboo blinds in Kyoto, Kyo Sudare to their basket making skills, and this lead to the production of Okasa Kongo Sudare. In 1948, a method to use a cutter was devised in Kawachinagano, which made mass production of bamboo blinds possible. Over the centuries, Shindo Village kept growing as a production center of bamboo blinds and basket ware, and around 1960, the village became one of the leading centers in Japan. In 1985, Osaka Kongo Sudare was designated as a traditional craft of Osaka by the Governor of Osaka prefecture, and in 1996, it was designated as a national traditional craft by the Minister of Economy, Trade and Industry. In 2004, the Sudare Museum was established to hand on the craft to future generations. Today, in addition to the production of blinds with traditional designs, contemporary designs that match our modern life style are being developed.