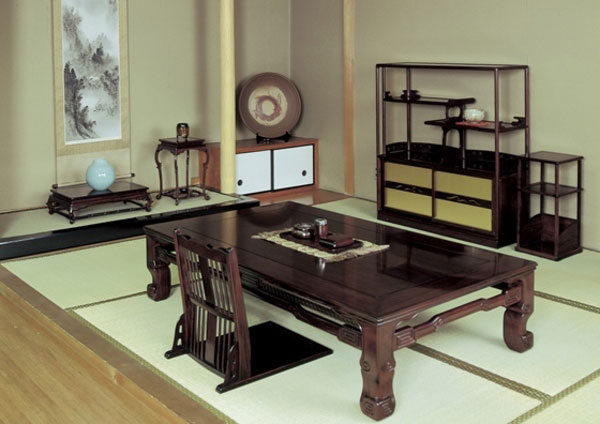 What is Osaka karaki wood joinery ?

Osaka Karaki Wood Joinery, called Osaka Karaki Sashimono in Japanese, are wooden articles manufactured in several cities of Osaka Prefecture. Karaki is wood from trees mainly grown in Southeast Asia, and include rosewood, ebony, Chinese quince, and Bombay black wood. Sashimono (joinery) is a woodworking technique for assembly without using nails or screws. Planks are joined by combining mortises and tenons. Karaki Sashimono artisans and merchants that settled in Osaka in the Edo Period when the city was a bustling center of commerce established the history and tradition of Karaki Sashimono in the region. Osaka Karaki Sashimono are characterized by their shiny solid and attractive colors and urushi lacquer surfaces as smooth as a mirror. Today, furniture made with the traditional techniques still match well with modern interior, and products range from cabinets and tea shelves to tables, such as Japanese low tables and vase stands, as well as very small items, like chopsticks and small boxes.

In the Nara Period (710 - 794), products brought back to Japan by the Japanese missions to Tang-dynasty China included those made of rare wood that had never been seen in Japan. These products were called karaki and are said to be the origin of Osaka Karaki Sashimono. In the Azuchi-Momoyama Period (1560 - 1600), the use of karaki items increased in parallel with the emergence of the Japanese arts of tea ceremony and flower arrangement. Due to the inconvenience of shoin zukuri style (a traditional style of Japanese residential architecture) built-in two-level shelves and desks, the demand for portable furniture increased. Joinery artisans evolved from among carpenters, and professional joiners appeared as the number of types of sashimono (joinery) increased, until joinery was established as a profession in the Genroku era (1688 - 1704). During the Edo Period (1603 - 1838) , Osaka became a thriving center of commerce, and karaki wood imported to Nagasaki was transported to Osaka. Since pharmaceutical wholesalers in Osaka were selling karaki wood cabinets, a guild of joiners was established, which led to an increase in the number of artisans, and Osaka Karaki Sashimono was established as a craftwork of Osaka. At present, as a traditional art craft with a history of 300 years, Osaka Karaki Sashimono has been certified as a traditional craft by the Minister of Economy, Trade and Industry.