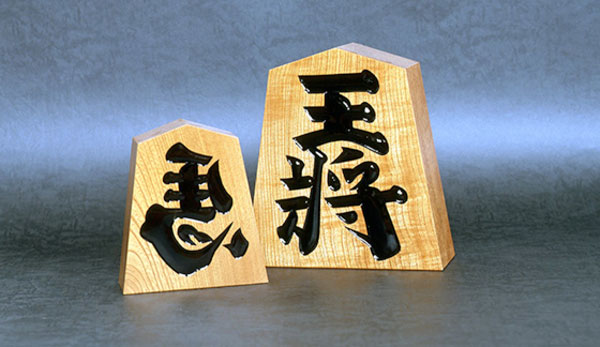 What is Tendo Japanese chess pieces ?

Tendo Japanese chess pieces (called Tendo shogi koma in Japanese) are made in the cities of Tendo, Yamagata, and Murayama in Yamagata prefecture. Production is thought to have begun in Tendo back during the Edo period (1603-1868) and now the city makes up almost all of the national output.
This craft features a glossy black color and lively kanji characters (Chinese-derived characters) written in Japanese lacquer. The original style of Tendo chess piece is kakigoma, with cursive font kanji characters written directly on a wood surface with lacquer. The writing of kanji in a square font style began after World War II and approximately one hundred fifty or so font styles are in use today. Besides the kakigoma style which now has fairly limited production, engraved styles have become increasingly popular. The horigoma style has kanji characters engraved and lacquered while the moriagegoma style uses additional urushi to slightly raise the kanji character above the surface of the piece. Kakigoma, Horigoma, Horiumegoma, and Moriagegoma have each been designated as National Traditional Crafts in 1996.
The variety of natural wood types and their beautiful grains contribute greatly to the fascination of Tendo chess pieces. Magnolia, hakusanbou, boxtree, and painted maple are all important wood materials with the finest being boxtree from Mikurajima Island of the Izu Islands, which are south of Tokyo. The beauty of the grain is reflected in the product price with full sets of forty shogi pieces with matching grain and colors costing a high amount. 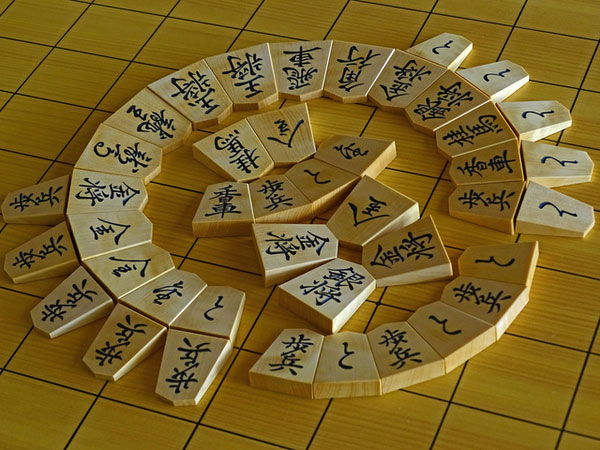 Shogi is a Japanese board game resembling chess thought to have originated in India and been imported to Japan in the Nara period (710-784). Scholars believe that shogi piece production came about at the end of the Azuchi-Momoyama period (1568-1600) with the development of the kakigoma style using black lacquer.
Japanese chess pieces began to be made in Tendo in the late Edo period, when the game was already popular among the general populace. At the time the Tendo domain (modern day city of Tendo) was suffering from financial difficulties and to restore the economy, local people learned how to make chess pieces from the neighboring Yonezawa domain (now city of Yamagata), and established the kakigoma cursive font style. When chess piece production in Tendo became a full-fledged industry, former samurai became woodworkers or kanji character artisans, collaborating to help further development. In a short amount of time, the city of Tendo became famous throughout the country as the mass production area of shogi pieces. During the Taisho era (1912-1926), production became mechanized and grew so much that even children helped to write characters on pieces. The oshigoma style (chess pieces with stamped kanji characters) was introduced in the early Showa era (1926-1989), and Tendo overtook the city of Osaka to have the number one chess piece production in the country. The production of oshigoma and kakigoma peaked in 1955 and then declined as the engraved horigoma style became more popular. From around 1965, research and development of exclusive products such as horiumegoma and moriagegoma began. 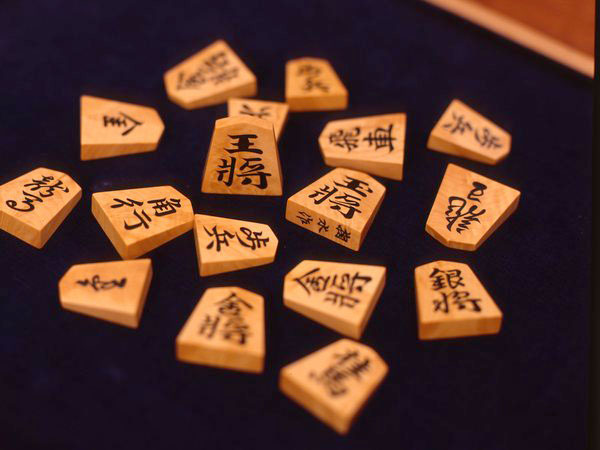