Sanshin is a musical instrument produced around Naha of Okinawa prefecture. It is used for Kumiodori, which is a theatrical art listed on the UNESCO's Representative List of the Intangible Cultural Heritage of Humanity, Ryukyu opera, Okinawa's intangible cultural heritage, as well as various kinds of music such as folk and pop music. Many people are fascinated by the simple sound of sanshin.
Sanshin is consisted of a neck, body and pegs where the strings are attached. There are different types of sanshin depending on the shape of the neck, and among them, there are seven typical types of sanshin which are named after the craftsmen of the Ryuku Dynasty that created them. Delicate craftsmanship is necessary to produce a sanshin, and sometimes it could take decades to make one sanshin, from choosing the wood to completion. Snakeskin is used on the body. In the old days, it was a symbol of wealth to have a sanshin with a snakeskin body in Okinawa. People would display a pair of sanshin made from the same wood called mitu sanshin on their alcove to bring good luck, or they would place the sanshin in a lacquered box and treasure it. In this way, sanshin is not only an instrument, but has a special meaning within the Okinawan culture. 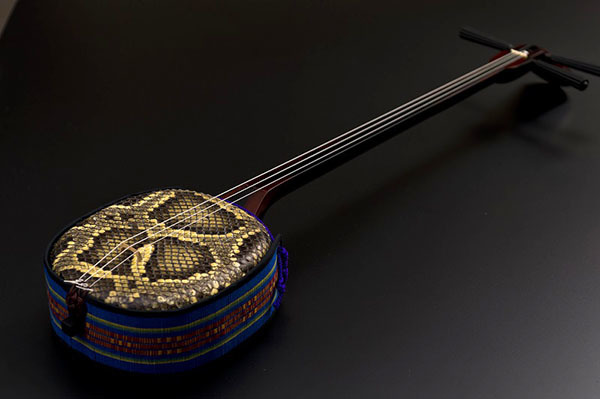 In the late 14th century, an instrument called sanxian, which is said to be the origin of sanshin, was brought to the Ryukyu Dynasty from China. In the 15th century, people of the samurai class were recommended to play sanshin. Sanshin became an official instrument for court music in the beginning of the 17th century, and was played in various events. At the same time, a post to control sanshin producers was established. This produced master craftsmen who made high quality instruments. As Kumiodori and other performing arts were flourishing, sanshin established its position as one of the main instruments in court music.
With the abolition of feudal domains and establishment of prefectures in 1897, the Ryukyu domain became Okinawa prefecture, and the samurai class who were the players of sanshin, lost their positions. However, as they spread out to regions, sanshin became known widely to the general public.
Many sanshin were lost in the war when Okinawa became a battlefield in 1945, but in and after 1955, exquisite instruments that were able to avoid damage from the war started to be protected as an important cultural property, and the sanshin culture that started from the Ryukyu Dynasty is still treasured and protected today. 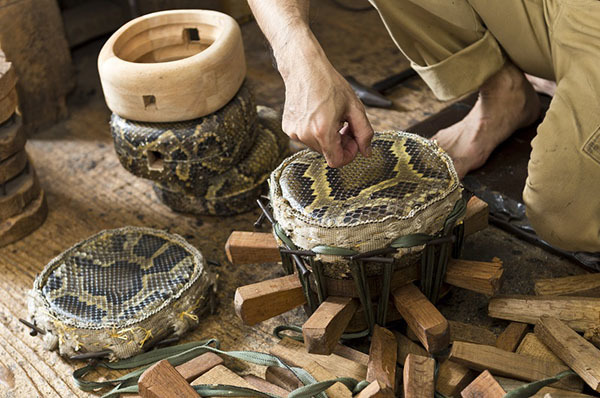