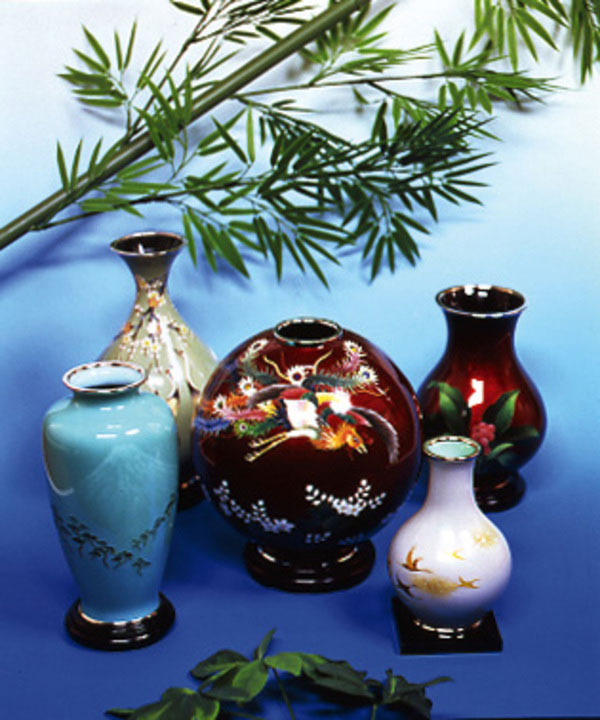 Shining examples of the finest craftsmanship
Jewels of Japan: elegance and splendor

What is Owari Cloisonné ?

Owari Cloisonné (called Owari Shippo in Japanese) is a type of enamelware, produced in Ama and Nagoya, Aichi prefecture, that is decorated with vibrant colorful designs often depicting natural scenery or the beauty of nature. The name shippo refers to the seven jewels of Buddhism, as cloisonné was so beautiful it was as if they were actually inlaid with the precious stones mentioned in the Buddhist scriptures. This craft is known for having brightly colored enamel on a metal base like copper or silver and is produced with a variety of techniques. For modern cloisonné, the basic technique is yusen-shippo (wired cloisonné) which involves affixing metal wires along design lines drawn on a metal base. Enamel is applied within the wires, and the piece is fired and polished. For musen-shippo (wireless cloisonné), either the metal wires are removed before firing or no wires are used at all, which allows subtle gradation of color rather than clearly delineated borders like wired cloisonné. In moriage-shippo (raised cloisonné), sections of the enamel surface are raised above the level of the metal wires and fired to give a relief effect. Cloisonné can have a sparkling glasslike effect like the delicate shotai-shippo (plique-à-jour), which is made by fixing silver wires on a copper base, applying and firing translucent enamel, polishing, and removing the base by acid corrosion. There are many more techniques which are used in different combinations to make new techniques. The unique sparkle and colors of the cloisonné glass is fascinating.

Cloisonné, which started in Ancient Egypt, was introduced to Japan via Europe and China. The oldest cloisonné ware that has been found in Japan to date, was excavated from an ancient burial mound dating from around the 7th century and had been used as fittings for castles and temples. Between the years 1830-1844, cloisonné plates were imported from the Netherlands. Tsunekichi KAJI, a feudal retainer of the Owari domain (now western Aichi prefecture), studied the plates to identify and modify the manufacturing process. His technique took root in local villages as an industry undertaken by the second and third sons of farming families. The cloisonné manufacturing process rapidly spread, and the craft produced in the Owari region came to be known as Owari Shippo. As the names of individual craftsmen in Owari were not recorded or inscribed on their pieces, cloisonné production became a village artisan industry, rather than artwork by individuals. Even so, standards were so high that in 1867, Owari Cloisonné became known worldwide when it won an award at the Universal Exposition held in Paris. As a luxury item, Owari Cloisonné was greatly affected by wartime and the fall of the economy. During World War II, production was ordered to stop due to the enactment of Limitation Rules on Manufacturing and Selling of Luxury Items. However, when Shinji YOSHINO assumed the post of governor in 1943, he reinstated Owari Cloisonné as a local industry.