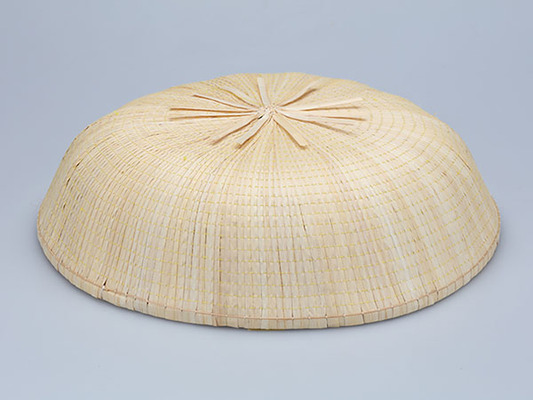 What is Etchu Fukuoka Sedge Hats ?

Etchu Fukuoka no suge gasa, Etchu Fukuoka Sedge Hats, are a traditional craft produced in Takaoka, Tonami, Oyabe, and Nanto of Toyama prefecture.
The sedges produced in Fukuoka, Toyama are top quality as they survive the severe winters of the Hokuriku region, and are delivered throughout Japan.
There are many types of sedge hats produced in Fukuoka, but a distinguishing characteristic is that they are all round hats.
The diameter of the hat can be adjusted in multiples of three centimeters. The frame of the hat is made in the size requested, and sedges are woven and sewn up.
Standard hats are tsuno gasa, a pointy hat used for farmwork, fuji gasa, shaped like Mt. Fuji, ohno gasa, shaped like a half sphere, dohbuka gasa, round on the edge to avoid the sunlight and rain, sando gasa, used by express messengers in the Edo period, jirocho gasa, the largest hat, tsumaori gasa, a traveling hat for women, and ichime gasa, which is said was used by the princesses in the Heian period. New types are helmet shaped hats, otome gasa, designed for women, fashionable, colorful hats called macaron, and a hexagonal hat called roppo.
Miniature hats are also popular for souvenirs. All of these hats are made using the traditional techniques that have been passed down for more than one hundred years. They have recently succeeded in dyeing sedges and are making new products with these dyed sedges. 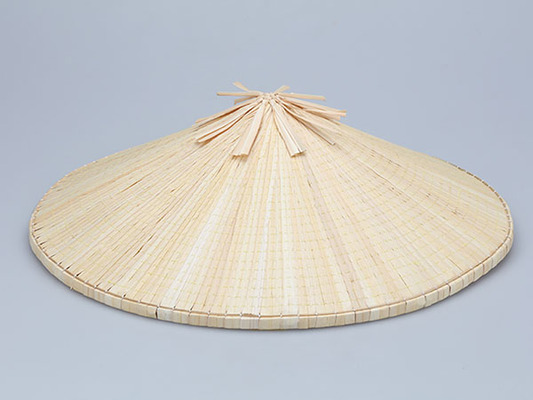 Sedge hats have been produced in Fukuoka, Takaoka City in Toyama for a long time. It started when the Koyabe River repeatedly flooded until around the year 400, making a swamp on the banks where high quality sedges started to grow.
Straw raincoats were produced with these sedges. The light, good quality raincoats became popular, and the town started to make sedge hats as a side business. The production of hats was industrialized around 1670 with the protection and encouragement of Tsunanori MAEDA, the feudal lord of the Kaga Domain.
Production of sedge hats was at its peak at the end of the Edo period, producing a total of 2.1 million hats in 1864.
Demand for sedge hats for farmwork, dancing and folk crafts continued until the beginning of the 1960s, producing more than one million products per year, but currently the number has decreased to thirty thousand per year.
Even so, the advanced production skills are still used today, producing 90 percent of the total national production of sedge hats with their high quality local grown sedges. 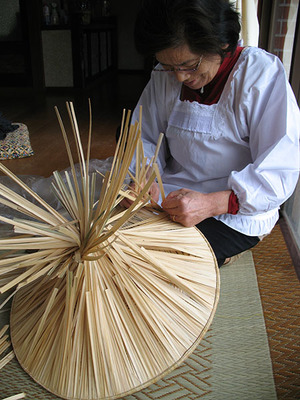