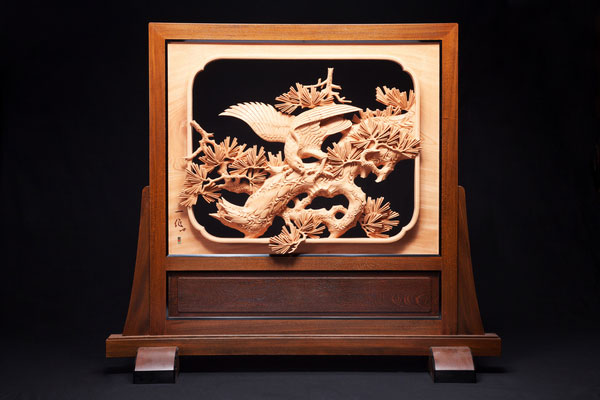 What is Inami wood carvings ?

Inami woodcarvings (called Inami chokoku in Japanese) are produced in the city of Nanto, Toyama prefecture mainly in the form of transoms*, decorative objects, and single-leaf screens**. They are usually made of Japanese camphor, paulownia, or zelkova wood, and carved with landscapes, flowers and birds, human figures, animals or dragons. Inami woodcarvings are distinguished by the exceptional woodcarving abilities of three-dimensional works filled with life and movement. Experienced artisans use over two hundred different chisels and knives to carve both sides of a work, a technique known as sukashi-fukabori, which amply demonstrates their superb craftsmanship. For example, in the carving of a transom between rooms, the artisan takes into account the gaze of a person looking up from below, and ensures that the many layers create depth in the work. In addition, these elaborate carving techniques create shadow, giving great expressiveness so that when one looks at a dragon, it is as if at any moment it will fly free. In recent years, a large amount of Inami woodcarvers have combined their dragon or lion motifs with the electric guitar or bass, showing that the traditional craft is continuously taking on new challenges. Since 1991, Japan's largest woodcarving event, the Inami International Wooden Sculpture Camp has been held in the city of Nanto and regularly invites woodcarvers from twelve different countries, leading to international cultural exchange.

*A transom is a horizontal beam that separates a door from a window or fanlight above it.
**A single leaf screen is an independently standing partition-screen with one panel. 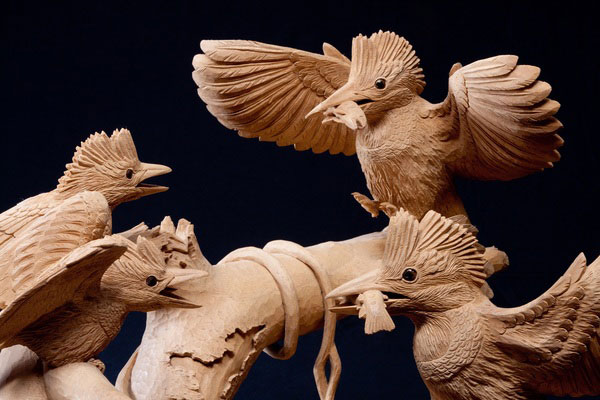 Inami is the former name of the city of Nanto in Toyama prefecture. The origins of Inami woodcarving can be traced back to the 1750s. The area already had a number of highly-skilled carpenters, but woodcarving only properly began during the rebuilding of the main worship hall at Zuisen-ji Temple in Inami, when Sanshiro MAEKAWA, an official patronage woodcarver of Kyoto Hongan-ji Temple arrived to take up work. Local carpenters, including Shichizaemon IX, worked under Maekawa and he passed on his carving techniques.
In 1792, at Zuisen-ji Temple, Shichizaemon IX carved the Chrysanthemum Doors of the Chokushi-mon (the gate for imperial envoys) and the Shishi no Ko Otoshi (lion posts located to each side). These works are his representative works and they are praised as Japanese woodcarving masterpieces. During the Edo period (1603-1868), carpenters also earned their living from woodcarving but the majority of such work was for temples. In the Meiji period (1868-1912), because of their great skills and artistic abilities, many of them left carpentry to become specialist woodcarvers. The type of work also expanded from temple carvings to decorative transoms in private houses to a much wider appreciation of the craft in society. In 1914, Goun OSHIMA submitted his piece Transom for a Library to the Panama–Pacific International Exposition held in San Francisco, 1915 and won an honorary gold prize. By this period, Inami woodcarving artisans were training many apprentices and significantly increasing their numbers. In 1947, a training school was established and the techniques have been passed down to the present day. 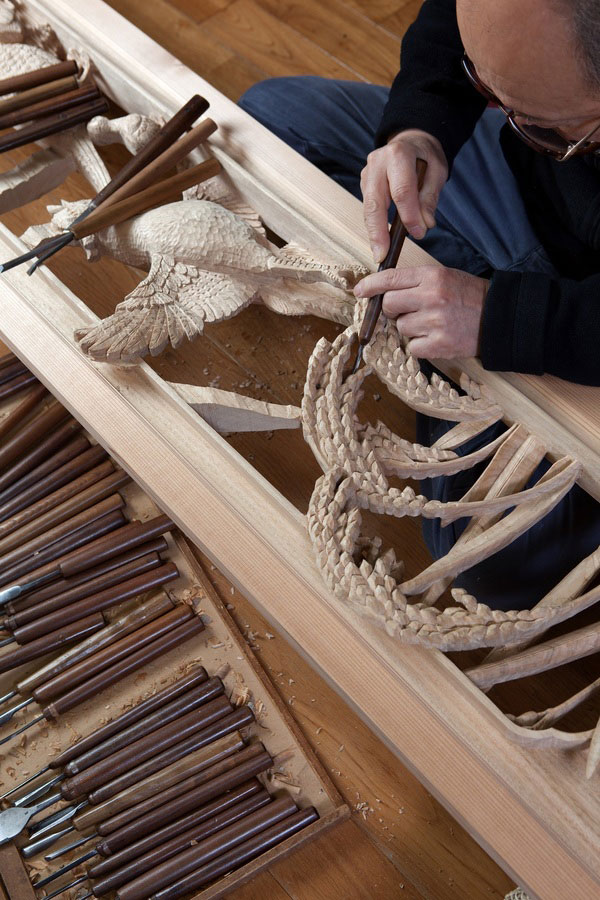