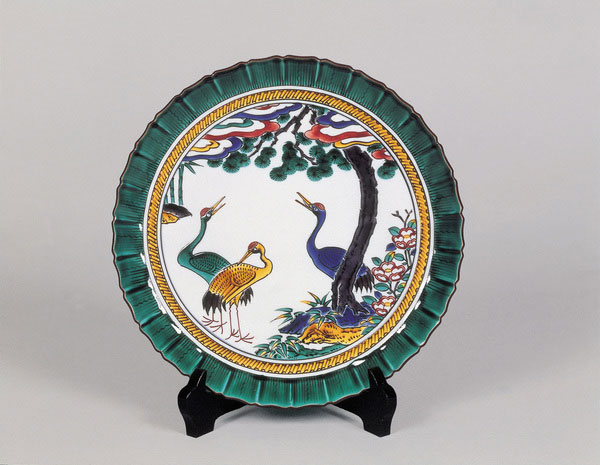 What is Kutani ware ?

Kutani ware (called Kutani yaki in Japanese) is a type of pottery manufactured in and around the city of Kaga in Ishikawa prefecture. It is a traditional handicraft that was first produced during the early Edo period (beginning of the 17th century). Kutani ware's notable features are vivid colors, bold and elegant designs, and a particular technique of overglaze decoration. This technique consists of using pigments to paint a pattern on the glazed surface and then firing the piece again. Because the paint used for the overglaze can be fired at about 800℃ (about 1472℉), there is a wide variety of colors that can be used. This technique is used for other crafts such as Arita ware as well. Kutani ware are all very colorful but the colors used differ depending on the type of pottery. Both kokutani and mokubeifu use five colors (red, yellow, green, purple, and Prussian blue), commonly referred to as Kutani gosai (literally, "the five Kutani colors"). Yoshidayafu is beautiful with four vivid shades of blue, yellow, purple, and Prussian blue. The red used in iidayafu is striking and distinctive. Eirakufu is characterized by its elegant pairing of red and gold. Finally, shozafu combines multiple pottery techniques into an impressive well-balanced ceramic. 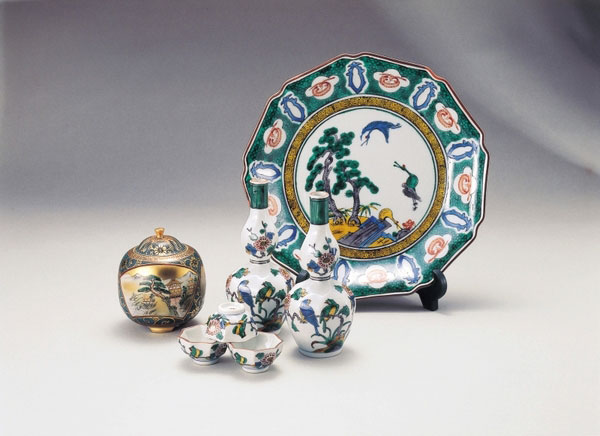 The beginning of Kutani ware dates back to 1655. The handicraft was named after the village where it was first produced, Kutani, which was then in the domain of a feudal lord. The lord sent a man named Saijiro GOTO to learn ceramic-making techniques in the town of Arita. When Goto got back, he established a Kutani ware kiln and incorporated the techniques from Arita but it eventually fell into disuse after half a century. The circumstances of what led to the abandonment of the kiln are unknown, but there is a theory that it was due to suspicions of smuggling. The ceramics produced in this short time period are called kokutani and have gorgeous colors and distinctive designs. About 100 years after abandonment of the kiln, the production of Kutani ware started again with support from the feudal domain. First, production of mokubeifu started in 1807 when a famous painter, Mokubei AOKI, was invited from Kyoto and established the Kasugayama kiln. Then several styles of Kutani-ware were created: yoshidayafu in 1827; iidayafu in 1831; shozafu in 1841 and eirakufu in 1865.