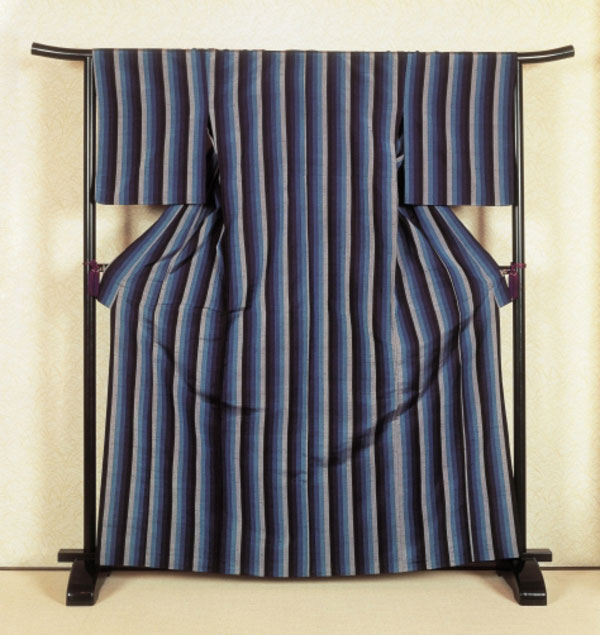 What is Ushikubi tsumugi silk ?

Ushikubi tsumugi is a silk textile produced in the city of Hakusan, Ishikawa prefecture. It was recognized as a traditional craft in 1988.
Some distinctive features of Ushikubi (which literally translates to cow's neck) tsumugi silk are its manual production process and the use of rare silk threads from double cocoons that are made together by two silkworms. Another name for this craft is Kuginuki tsumugi (nail pulling pongee*) because according to a popular anecdote, when the silk is caught in a nail, the silk is strong enough to pull it out. Double cocoons used to be considered irregularly shaped because of the difficulty in reeling silk from them. However, a technique of reeling silk directly from the cocoons by patiently disentangling them was developed. This technique lead to the successful production of stronger cloth woven with distinctive double silk threads.
With traits like excellent durability, breathability, soft texture and a beautiful sheen, Ushikubi tsumugi fabric is used in indigo-dyed kimonos with traditional kasuri**, ceremonial kimonos, sashes, and small accessories. Recently Ushikubi tsumugi has been used in Paris Fashion Week and otherwise noticed overseas as a clothing fabric.

*Tsumugi translates to pongee which is an unbleached type of Chinese fabric, originally made from threads of raw silk.
**Fabric that has been woven with fibers dyed specifically to create patterns and images.

The history of Ushikubi tsumugi goes all the way back to 1159 when the Heiji rebellion (short civil war) broke out. The wife of a member of the defeated Minamoto clan, fled to Ushikubi Village at the base of Mt. Haku (Ishikawa prefecture) and first introduced the weaving technique to the locals. During the Edo period (1603-1868), the region around Mt. Haku became shogun (feudal government) owned land and rose to prominence nationwide because of measures put into place to be protected by the shogunate and the development of a commodity economy. Ushikubi tsumugi fabric started being sold nationwide.
Ushikubi tsumugi grew in demand and along with flourishing sericulture and the development of pongee weaving during the Meiji period (1868-1912), a full-fledged production and sales structure was established. However, the silk industry met such a crisis that it disappeared around the year 1935. Decreasing demand for kimono and the outbreak of World War II led the production of pongee to disappear for a while, leaving it up to some artisans to preserve the traditional techniques.
After the war, the furtherance of the local industry in Ishikawa prefecture and enthusiasm for Ushikubi tsumugi resumed mulberry plantation and sericulture, contributing to the successful restoration of the Ushikubi tsumugi industry. In 1974, production factories were relocated from Ushikubi Village to other areas or neighboring towns due to the construction of the Tedorigawa Dam.