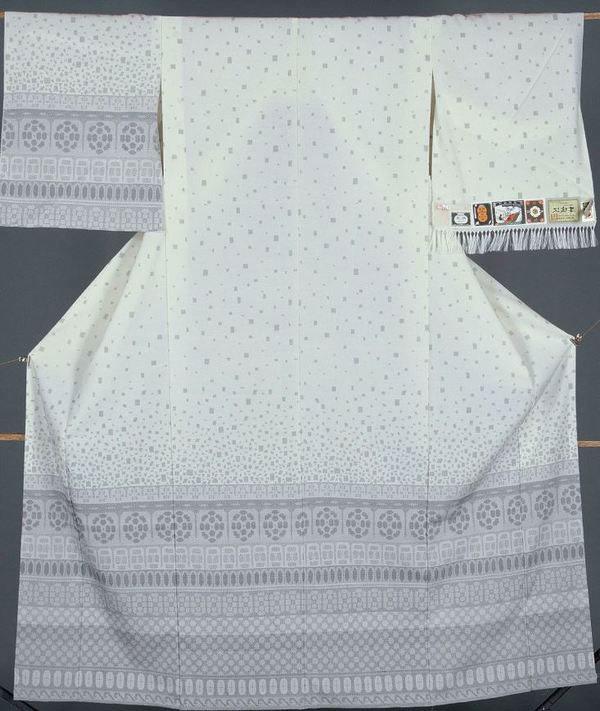 What is Hon-shiozawa silk ?

Hon-shiozawa is a textile produced in the former town of Shiozawa (now a part of the city of Minamiuonuma), Niigata prefecture. It is one of the textiles that represent the region, which is famous for linen and silk textile production. This craft used to be called Shiozawa omeshi. Some other well-known textiles produced in this region are Shiozawa tsumugi and Natsu shiozawa. All of these textiles, including Hon-shiozawa, originate from a traditional ramie textile called Echigo jofu that has been in the area since the 8th century.
This craft is known for its distinctively bumpy and crisp texture, which emerges when the textile is kneaded in hot water, and precise patterns, including the juji kasuri (cross pattern) and the kikko kasuri (tortoise shell pattern). The silk threads that are used for this craft have been twisted seven to eight times harder than other threads. After weaving using the hard-twisted (left and right) threads for the weft, the textile is kneaded in lukewarm water to bring out delicate wrinkles and a crisp texture. The warp threads (parallel to the perpendicular weft threads) for Hon-shiozawa are dyed using different techniques such as tie-dyeing, stencil dyeing, or paper stencil dyeing. The textile is woven while being carefully and precisely adjusted according to the design so that the kasuri patterns* are fine and sharp.

*A kasuri pattern, also called ikat, is precise patterning and images that result from a technique of wrapping fibers with thread in order to dye the specific parts of fabric.

The ramie textile that was presented by the Echigo domain (present day Niigata prefecture) to the Imperial Court in the year 731 is still kept in the Shosoin Repository* so it is proven that the production of such textiles had been established in the Echigo region during the Nara period (710-794). This region is covered with deep snow which creates the ideal environment for textiles that are sensitive to dry weather. Echigo jofu is a high quality ramie textile that has been woven in this region for a long time. Hon-shiozawa silk was developed from the techniques that are also used to produce Echigo jofu: kasuri patterns and a bumpy texture from kneading in hot water.
Silk crepe was mentioned in a list of high quality gifts that was written in 1867 so there is proof that the textile was already in production during the Edo period (1603-1868). Masatoshi HORI invented the hard-twist threads between the years 1661 and 1672 and then widely promoted the crisp-textured textile. This is considered the origin of Hon-shiozawa, though it is unclear whether this event actually happened. The difference from Shiozawa tsumugi, which is also made with the techniques of Echigo jofu, is that Shiozawa tsumugi uses the tsumugi threads made with raw silk for the warp and floss silk for the weft. Meanwhile Hon-shiozawa uses raw silk for both the warp and the weft and the wrinkles are created by kneading the woven textile in hot water.

*The Shosoin Repository is a building located in Nara, a former capital of Japan, that has been around since the eighth-century. It not only has a collection of treasures dating back to the Silk Road, it also preserves over ten thousand hand-written documents all dating from the Nara period. Today the repository is under the control of the Imperial Household Agency.