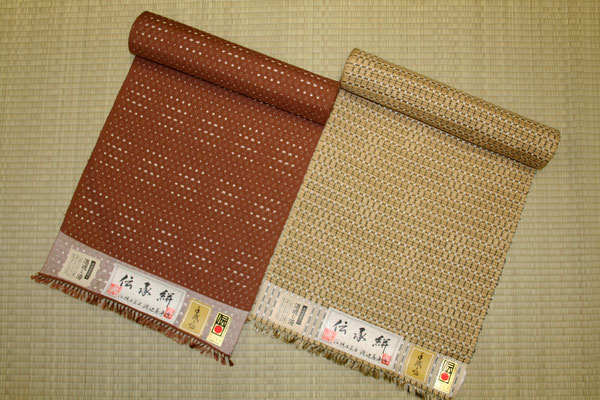 What is Tokamachi traditional resist-dyed textiles ?

Tokamachi Gasuri is a fabric produced in Tokamachi City and around Tsunanmachi in Nakauonuma, Niigata Prefecture. This area has heavy snow in the winter and is in a basin, so the climate and geographical features are all suitable for fabric production. Another famous fabric called Tokamachi Akashi Chijimi is also produced here, so the area is well known as a successful fabric producing area. The weaving techniques of kasuri (splashed patterns) used to produce Tokamachi Gasuri and Tokamachi Akashi Chijimi are the same, but the method of nenshi which involves twisting the threads together is different. This nenshi method creates a difference in the texture and the strength of the woven fabric. The characteristic of Tokamachi Gasuri is the lustrous texture of silk fabric with the patterns of tategasuri (vertical splashed patterns) and yokogasuri (horizontal splashed patterns). The luster and the texture of silk are distinctive in this fabric, and with the traditional, beautiful kasuri patterns and a modern style combined, Tokamachi Gasuri are cherished as a kimono for outings as well as for regular use at home.

It is said that the resist yarn dyeing techniques for Echigo Chijimi, a hemp fabric mainly produced around Ojiya, Niigata prefecture, already existed in the early 18th century. As the area around Tokamachi and Uonuma region is famous for its heavy snow, the humidity is high, and with its geographical features of being in a basin, there are no strong winds throughout the year. For this reason, ramie, material for hemp fabric, was produced to a great extent since the Asuka period (592 - 710). The development of the technique to spread fabric on snow called yukizarashi, enabled production of high quality fabrics, leading to the production of silk textiles later on. In the Edo period (1603 - 1867), the whole Tokamachi area became famous as a production area for Echigo Chijimi, and the fabric was used to make single-layer kimonos and ceremonial samurai costumes. In the late 19th century, Akashi Chijimi, a high quality silk fabric for use in the summer, became a nationwide standard. Kasuri weaving further developed and started to be used in silk textiles. In the Meiji period (1868 - 1912), various resist yarn dyeing techniques for kasuri were developed, and kasuri became even more popular. Even after World War II, Tokamachi Gasuri and Tokamachi Akashi Chijimi are the two famous fabrics that support Tokamachi as the "Town of Silk Textiles."