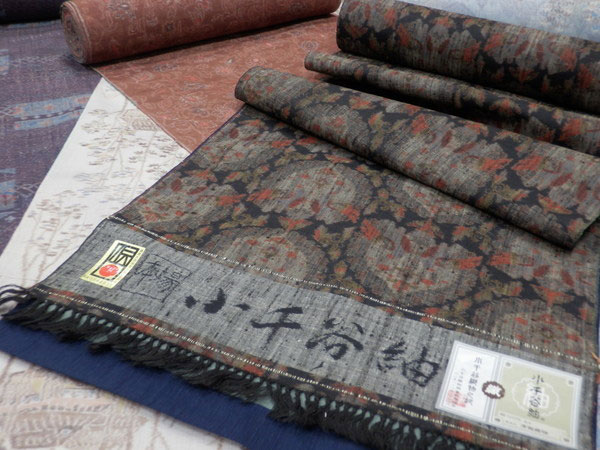 What is Ojiya tsumugi silk ?

Ojiya tsumugi is a silk fabric produced in the area around Ojiya, Niigata prefecture, which is a city known for heavy snow. Echigo jofu, a textile made of ramie, has been produced in this area for over a thousand years.
As new weaving techniques were introduced, a ramie textile called Ojiya chijimi developed from Echigo jofu. It has distinctive embossed patterns that are created by only weft (perpendicular) threads.
Ojiya tsumugi silk uses woven pongee* and the traditional production methods of Echigo jofu and Ojiya chijimi. A kimono made with Ojiya chijimi gives a soft and hazy impression created by the layers of the patterns created by the weft and warp (parallel) threads of dupioni raw silk. Also, this fabric is crafted in both a plain white tsumugi silk (called shiro tsumugi) and traditional resist-dyed with splash patterns (called yokosogasuri).
This craft has the soft and warm texture of floss silk combined with the smooth touch of lustrous silk. However, it is also durable so daily wear is not a problem.

*Pongee or tsumugi in Japanese is an unbleached type of Chinese fabric, originally made from threads of raw silk.

The production of Echigo jofu was already a prosperous business in the Ojiya area when Masatoshi HORI, a samurai from Akashi domain (present day Kobe prefecture) stayed in the region from 1661 to 1672 and reformed Echigo jofu to be a lighter and summer appropriate textile called Ojiya chijimi. New techniques for weaving patterns like stripes were developed for this craft and a greater variety of styles became available. The development of Ojiya chijimi helped the weaving industry in the region to flourish and expand even more.
During the mid-Edo period (1603-1868), fabrics were woven with silk threads using Ojiya chijimi techniques. At first, because the threads were pulled and spun from waste cocoons, the silk fabric was only meant for wear at home. However, the raw material of ramie suffered a serious shortage because of a famine in the late Edo period to early Meiji period (1868-1912), which led many manufacturers to quit producing Ojiya chijimi and switch to sericulture. This is the origin of Ojiya tsumugi.
Individual artisans started producing silk textile as well and Ojiya tsumugi became a well known traditional craft of the area. This craft successfully developed into a noticeable local industry as the area was fulfilled with all the factors to be the most suitable production environment like a history of sericulture, the technique of Echigo jofu, and the humid winter climate.