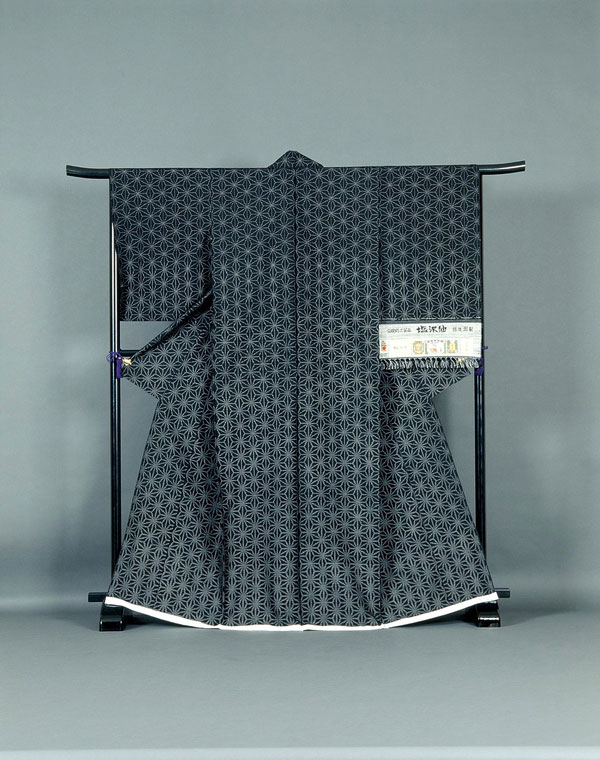 What is Shiozawa tsumugi silk ?

Shiozawa tsumugi is a silk textile produced in the former town of Shiozawa (now a part of the city of Minamiuonuma), Niigata prefecture. The area is known for its heavy snowfall and wet winter climate which are ideal for weaving. Echigo jofu, a fabric made from ramie, has been produced in this area since the Nara period (710-794). Shiozawa tsumugi then originated from Echigo jofu techniques during the mid-Edo period (17th century), with raw silk being used as the warp (parallel threads) and hand-spun floss silk yarn as the weft (perpendicular threads).
This craft is notable for using kasuri patterns*. These patterns include the finely detailed T-shaped pattern or ka gasuri, a cross pattern or juji gasuri, and a tortoise shell pattern also called kikkou gasuri. The fabric is a single base color in cool tones, mostly navy blue, black or white which combined with a black kasuri pattern, possesses an elegant appearance. It incorporates the brilliance of raw silk with the rough texture of pongee**. Shiozawa tsumugi, a type of pongee, feels lighter and smoother than other kinds of pongee. Other fabrics woven with techniques based on Echigo jofu are the rough textured Hon-shiozawa and Natsu-shiozawa, which is a textile made for summer.

*A kasuri pattern is precise patterning and images that result from a technique of wrapping fibers with thread in order to dye the specific parts of fabric.
**Pongee or tsumugi in Japanese is an unbleached type of Chinese fabric, originally made from threads of raw silk.

The production of fabrics, including silk textile, has long been a successful industry in the Shiozawa area, one that is particularly known being Echigo jofu. This ramie textile has been the basis for many textiles in this region including Ojiya chijimi, Hon-shiozawa tsumugi, and finally Shiozawa tsumugi, which originated during the 17th century. Along with Yuki and Oshima tsumugi, Shiozawa tsumugi or silk pongee is known as one of the three main tsumugi of Japan, making it a very precious craft. The most popular pattern is the finely detailed T-shaped pattern, ka gasuri, with it making up sixty percent of all Shiozawa fabrics that are currently produced. The difference from Hon-shiozawa tsumugi, which is also made with the techniques of Echigo jofu, is that Hon-shiozawa uses raw silk for both the warp and the weft and it has a wrinkly texture from being kneaded in hot water. Meanwhile Shiozawa tsumugi uses the threads made with raw silk for the warp and floss silk for the weft. At its production peak, there were many Shiozawa manufacturers but the amount has decreased in modern times, giving the craft a high scarcity value.