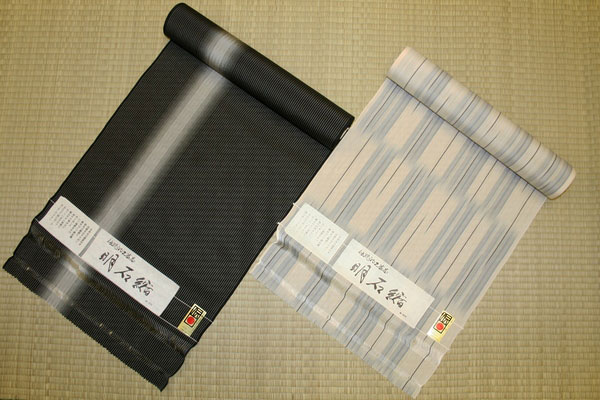 What is Tokamachi akashi chijimi textiles ?

Tokamachi Akashi Chijimi is a textile produced in the area surrounding Tokamachi City in Niigata Prefecture. This is a very delicate and thin textile that requires the high-level techniques and precision of experienced craftsmen. An experimental textile based on the summer textile of Nishijin in Kyoto was produced at the end of the 19th century, and the production and sales of the textile started from the mid-Meiji period (1868 – 1912). The characteristics of Tokamachi Akashi Chijimi are the elaborately woven beautiful patterns and the refreshing texture created by the hard-twisted highest quality weft threads. Silkworm cocoons that are used as raw material for the threads sometimes contain soiling or impurities at the beginning or end of the thread. These damaged threads cannot be used as the soiling becomes visible when they are twisted hard. Therefore, Tokamachi Akashi Chijimi uses only the center part of the threads where there are less or no impurities. The skilled craftsmen weave delicately patterned threads carefully and precisely. A roll of textile that has a delicate texture is produced in this way.

It is assumed that the silk-reeling industry had started in the area surrounding Tokamachi City in Niigata Prefecture a long time ago, as a spindle base, which is a tool to twist the threads, was found in the Babanoue ruins (dated approx. 1500 years ago). Echigo Chijimi produced in this region was chosen for the warriors' ceremonial robes in the Edo period (1603 – 1868). At the beginning of the Meiji period (1868 – 1912), textile production became a side business for farmers during their off-season. After that, a new product was developed based on the summer textile brought back from Nishijin in Kyoto. The textile called Tokamachi Sukiya already existed, and it became the base for Tokamachi Akashi Chijimi. They started to develop a technique to produce hard-twisted weft threads around the same time. Then, using the new technique, they succeeded in making Sukiya Chirimen, a thin silk crepe material, and this put the production of Tokamachi Akashi Chijimi fully in progress. They started selling the product in markets in the mid-Meiji period and the textile became a special product of the region. Tokamachi Akashi Chijimi and Tokamachi Kasuri were both designated as traditional national crafts in 1982.