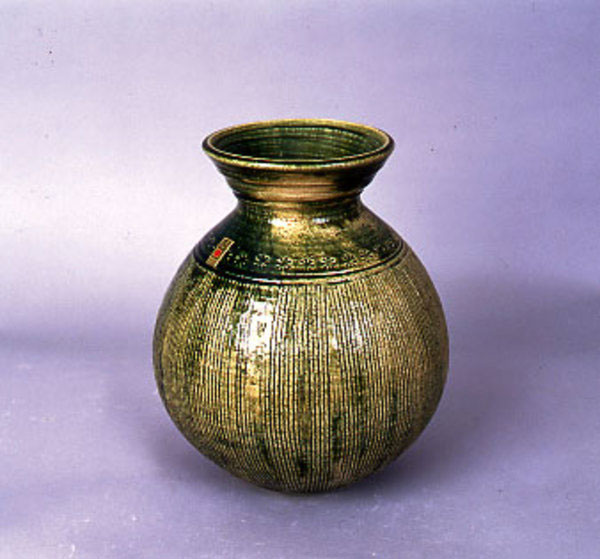 One of Japan's Six Ancient Kilns
clay cultivated at the foot of Mt. Saruna

What is Akazu ware ?

Akazu ware (called Akazu yaki in Japanese) is a form of pottery produced around Akazucho in the eastern part of the city of Seto, Aichi prefecture. This craft is a type of Seto ware, one of Japan's Six Ancient Kilns. Together with Bizen, Tamba, Echizen, Shigaraki, and Tokoname, Seto ware is considered to be one of the most outstanding Japanese kilns with traditions that remain today.
This craft was the first to use the technique of glaze enamel application, even among Japan’s Six Ancient Kilns. This started from ash glaze in the Heian period (794-1185), after which iron glaze and koseto glaze appeared in the Kamakura period (1185–1333), and by the beginning of the Edo period (1603-1868) there were seven types of established glazing techniques. Also, twelve types of decorating techniques were developed, including flower printing, where patterns are embossed and comb marks, where wavy forms, dotted lines, and swirl patterns are drawn.
In order to keep the tradition of Akazu ware alive, traditional techniques have been inherited and the next generation diligently works to produce new pieces. This craft can be found in a variety of forms, ranging from art pieces and flower vases, to tea utensils and general dining goods.

Akazu ware has been around for a long time, as it developed from the base of Mt. Sanage in the city of Seto during the Kofun period (300-538) and said to be based on Sue ware which existed in the Nara period (710-794). This craft had the appearance of ash glaze (Japan’s oldest form of enamel) from the Heian period (794-1185) onwards and developed diverse techniques like pasting and embossed carving.
Going into the Azuchi-Momoyama period (1568-1600), the appearance of enamels such as kiseto glaze, shino glaze and oribe glaze, together with the growth of tea ceremonies and flower arrangement, led to Akazu ware being treated as a priceless treasure, particularly tea bowls. Elegant pieces with iron decorations that evoke the Azuchi-Momoyama period are still produced today. The Owari domain was established around Nagoya Castle during the beginning of the Edo period (1603-1868). As the official kiln of the Owari domain, Akazu ware came to be produced in large quantities in forms ranging from high-grade tea utensils to tableware for everyday use.
There are now more than sixty traditional kilns in Seto, and the area has grown to become Japan’s largest ceramics center.