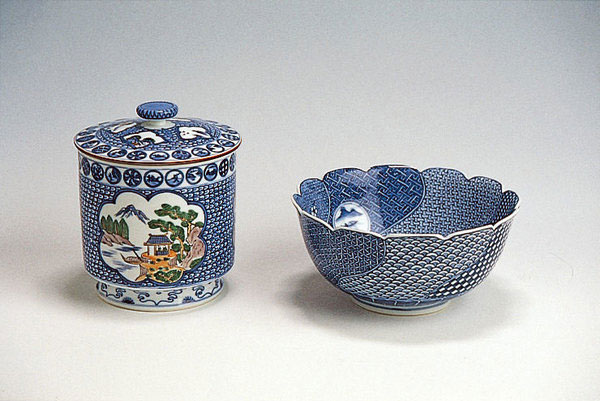 Seto Sometsuke ware (called Seto Sometsuke yaki in Japanese) is ceramic ware produced near the cities of Seto and Owariasahi in Aichi prefecture. The term sometsuke is normally used when designs are painted on porcelain with an indigo blue pigment, but for this craft, it also includes painting on ceramics. Seto Sometsuke ware is a white bisque fired pottery and has realistic and delicate designs drawn with indigo colored pigment. The area around Seto is famous for producing potter’s clay like feldspar from Mount Sanage, motoyama-kibushi clay, and motoyama-gairo clay, which are used as the raw materials for the white base. The scenery and nature of Seto are drawn onto the white base using asbolite which usually develops an indigo color.

Seto Sometsuke ware dates back to the early 19th century during the Edo period when a potter from Seto named Tamikichi KATO learned how to manufacture porcelain in Kyushu and brought the technology back home. Porcelain painters then learned the art of Chinese-style painting from various artists that visited Seto, and developed the techniques for ceramics painting. It is said that production and decoration techniques were established in the middle of the 19th century. The painting techniques, which depict the scenery and nature of Seto, were highly praised at the World Expos held in Paris and Vienna and influenced the Art Nouveau movement in Europe. As the Meiji period (1868-1912) began, Seto Sometsuke ware production became more prosperous. In addition to tableware and stacked food boxes, large products such as tables, hanging lanterns, and flower vases were produced, which steadily continues today.