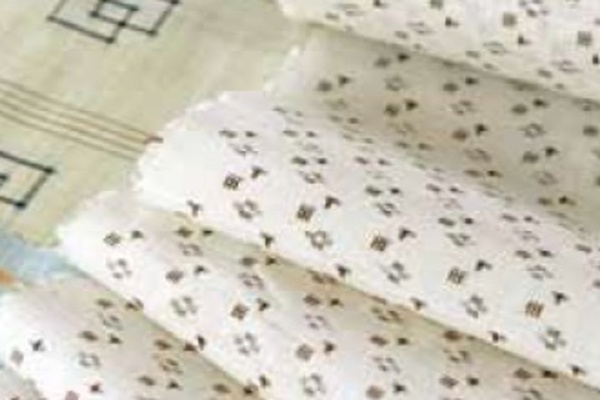 What is Yaeyama ramie cloth ?

Yaeyama jofu is a fabric produced in the area surrounding Yaeyama ward in Ishigaki city, Okinawa prefecture. This textile is woven with hand-spun ramie threads and used to be produced as a tax to the Ryukyu Kingdom (present day Okinawa) in ancient times. This craft is the only fabric in Okinawa that uses a rubbing and printing technique. As a refreshingly white fabric with dark brown kasuri or ikat patterns, it is used mainly for summer kimono. The threads and dye used for this fabric are fiber from ramie and dye from kuru (the vine of a yam found in Okinawa) which are plants that grow wild in Yaeyama. The fabric is soaked in the ocean as the intense sunlight deepens the color and the seawater makes the white become lighter. These processes make the ikat patterns look even more vivid.
Yaeyama jofu has a dry texture of hand-spun ramie threads that create an airy feel to the fabric. It takes approximately fifty days to make the warp threads for ramie and approximately forty days to make the weft threads that are required to make this craft. A lot of work is required so increasing amounts of artisans are using ramie that has not been handspun for the warp threads.

It is known from passages in the Veritable Records of the Joseon Dynasty that people in Yaeyama have been producing ramie fabrics since ancient times. High quality ramie fabric started being officially produced for the Ryukyu Kingdom on the basis of a sketch drawn by a court painter. The Satsuma domain invaded Ryukyu in 1609 and started a poll tax on Yaeyama that was paid in the form of Yaeyama jofu. All of the women on the island started producing the fabric which led the patterns to gradually improve and become more refined. This is how modern day Yaeyama jofu was created. Back then, this craft was so valuable that few people could wear it.
After the poll tax was abolished in 1886, production of this craft started to develop as a regional industry, a new type of loom was invented, and more men became involved in the fabric production. During the Taisho period (1912-1926), an improved loom became available so that the fabric produced had more accurate positioning of the ikat patterns since there was less irregularity in the tension of the threads. Currently, the prefecture of Okinawa and the city of Ishigaki are working together in building a business to cultivate successors of Yaeyama jofu artisans.