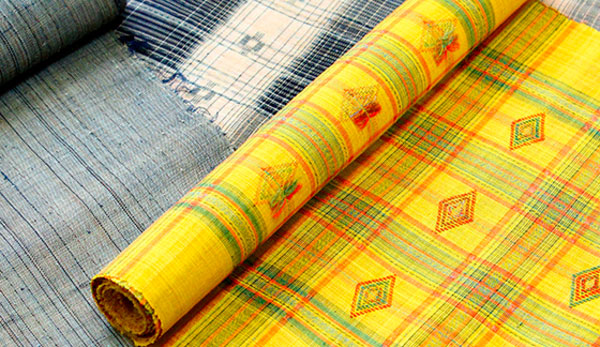 Simple and natural 100% handmade fabrics
reflecting the climate of Okinawa

What is Kijoka banana fiber cloth ?

Kijoka No Bashofu refers to woven cloth produced in Ogimi Village, Okinawa. Bashofu is made from the fibers of the Japanese banana plant called Basho, and has been worn in kimono among commoners in Okinawa since ancient times.
Kijoka No Bashofu is characterized by its smoothness, lightness, air permeance, thinness and strength. Described as “the wing of a dragonfly,” it is less likely to stick to the skin even in a humid climate and highly valued by people of Okinawa. Though Basho trees are indigenous to Okinawa, Kijoka has engaged in the cultivation of the plant so as to obtain better threads. The cultivation process, from pruning to producing threads, requires three years. Harvested Basho trees undergo manual pretreatment before producing fiber threads. With 60 Basho trees, weaving a bolt of Bashofu is a three-month process after tree harvesting. Kijoka No Bashofu is often called a phantom woven fabric because it employs the integrated, manual production process, from cultivation through dyeing and weaving, with local materials, which is seldom found anywhere else in Japan.

It was in 1764 that multi-colored printing was developed, and became popular in Edo (now Tokyo) the following year, under the name of nishiki-e.