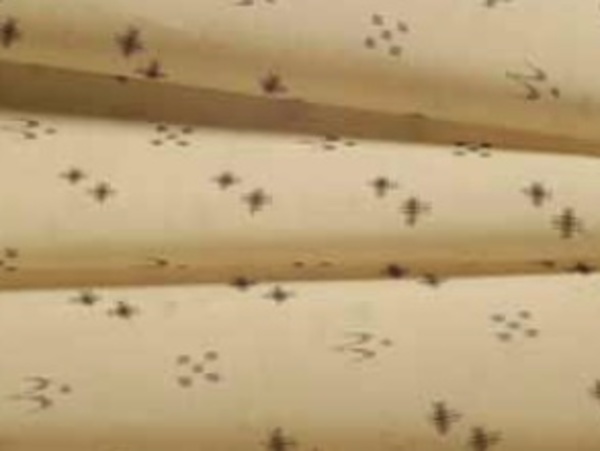 What is Ryukyu traditional resist-dyed textiles ?

Ryukyu kasuri is a textile made in Okinawa prefecture. It is made mostly from silk and dyed with both plant and synthetic dyes using a kasuri* or resist-dyeing technique.
This craft features over six hundred different kinds of patterns inspired by the nature and animals of Okinawa and the main products are various kimono. Textiles specially made for summer kimono are known as kabe jofu.
The beautiful geometric patterns originate from an illustrated book, the Miezu-cho, preserved from the Ryukyu Kingdom. Craftsmen have developed unique patterns based on upholding old design traditions as well as newer works that reflect the spirit of each era.
Ryukyu kasuri preserves the traditional hand weaving method of running a weft (perpendicular silk thread) between warps (parallel silk threads). This is a painstaking process and craftsmen patiently weave one to two meters of cloth per day.

*A textile technique of securely tying specific sections of fabric with thread so that only certain portions will be dyed resulting in a desired pattern.

The Ryukyu Kingdom used to have trade with China and Southeast Asia in the 14th and 15th centuries which led to the import of weaving techniques. Ryukyu kasuri was initially produced as a tribute textile offered to the Ryukyu Kingdom.
Painters working at the Shuri Castle (palace of the Ryukyu Kingdom, located in the present day capital of Okinawa) made a picture album of designs, the Miezu-cho, which were used for the tribute textiles. The designs, dyeing, and weaving techniques were developed and refined over time.
In the Meiji period (1868-1912), production increased and this textile began to be available as a commercial product on the market. During the Taisho era (1912-1926) and beginning of the Showa era (1926-1989), the prefecture of Okinawa encouraged the training of artisans. Later, other factors such as the migration of craftsmen helped to create an industrial foundation. With the establishment of private factories, Okinawa eventually became a famous kasuri textile production area.
With the start of World War II, material supplies were stopped and textile mills closed. During the war, the Okinawa islands saw some of the fiercest fighting, many artisans died, and facilities were destroyed. The production of Ryukyu kasuri was recovered by integrating traditional techniques with modern designs. Today, a variety of clothing accessories and interior goods with a wide range of designs and colors are produced.