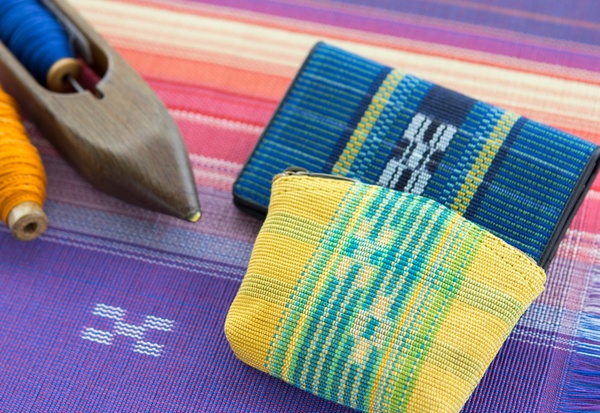 What is Yaeyama cotton cloth ?

Yaeyama minsa is a fabric produced in the town of Taketomi, Yaeyama district and the city of Ishigaki, Okinawa prefecture. The origin of this craft is not clear but it is thought that the kasuri belt was brought to Okinawa from Afghanistan via China. The fabric was also used for the kakuobi (men’s stiff sash) of the ryuso (folk costume of Okinawa). This cloth has a ribbed texture with stripes and kasuri patterns woven with cotton threads that have been dyed with indigo for both the warp and weft. Yaeyama minsa has always been woven to make daily wear belts. "Min" means cotton while "sa" means a narrow belt. Kasuri patterns are produced by hand tying and the fabric is in a vivid contrast of navy blue and white. Indigo from India, Ryukyu indigo, kuru (dye extracted from vines grown in Okinawa), plant dyes, including those from the fukugi tree, and more recently chemical dyes are used for Yaeyama minsa. One method of weaving this fabric is to use a takabata (traditional Japanese treadle-operated tall loom) with the reed and the other is to use the tejime method without the reed. The finished belt differs in texture and feel based on the method.

It is thought that Yaeyama minsa was brought to Okinawa from Afghanistan via China. On the other hand, some say that the fabric was brought to Okinawa from India where cotton was first made. According to old documents, this fabric was in use during the early 16th century Ryukyu Dynasty, so the fabric is considered to have already been produced at this time. This fabric was given as a gift from women to men as proof of their marriage when they got married at the time when it was standard for the couple not to live together, and the husband visited the wife’s residence occasionally. The pattern looks like a check pattern using four or five squares and the detailed hemming on both sides of the pattern resembles the legs of a centipede. These designs convey the wish that the women had for their husbands to come frequently like a centipede. The design of five and four incorporates the meanings of itsu (meaning whenever which has the same pronunciation as five) and yo (which means both world and four). Therefore, Itsu no yo mademo expresses the meaning of a desire for their husbands to visit forever. The center of Minsa production used to be the town of Taketomi. However, the craft is also now produced on the island of Ishigaki. The fabric used for Minsa used to be only navy blue, but today, a variety of colors as well as various material such as Japanese banana plant, ramie, silk and cotton are used. Accessories, bags and other products are made with Yaeyama minsa fabric and are sold to tourists.