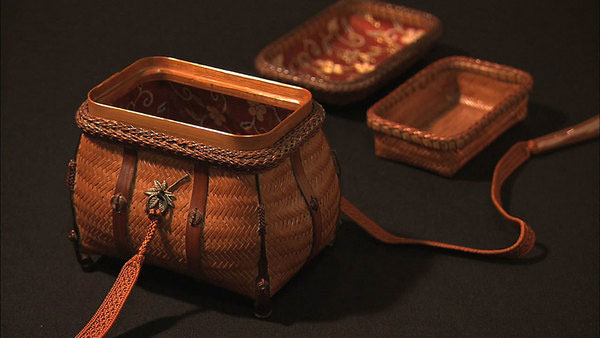 What is Beppu bamboo crafts ?

Beppu take-zaiku are bamboo crafts produced in the city of Beppu, Oita prefecture mainly from odake bamboo* grown and harvested locally. This craft is entirely handmade and uses a distinctive range of basic weaving techniques. It is also the only Japanese traditional craft in Oita prefecture to be designated by the Ministry of Economy, Trade and Industry. There are eight basic weaving patterns. Some of these patterns are a cross, hexagon, octagon, and bull's eye. Two hundred pattern combinations are possible from the original eight weaving designs. In addition to standard daily use items like flower, fruit, and rice baskets, there are also popular items that cater to more contemporary tastes, such as handbag or shopping baskets. The craft is not limited to just baskets and containers, but is also used in more artistic works, like for the recent interior design of a ryokan (Japanese traditional inn) in Beppu city.

*Odake bamboo or giant timber bamboo is a strong, thick type of bamboo.

A document from the Nara period (710-794), Nihon shoki (Chronicles of Japan), states that Beppu bamboo crafts originate from when the 12th Emperor of Japan, Keiko (who reigned from 71-130 A.D.), visited Beppu on his return from an expedition to southern Kyushu. While staying in the area, the Emperor's private chef wove a rice bowl basket from the local bamboo. By the Muromachi period (1336-1573), the baskets were used by nomadic peddlers to carry their merchandise, beginning the Beppu bamboo crafts market. In the Edo period (1603-1868), Beppu became widely known as one of Japan's best hot spring resorts, and bamboo baskets for storing cooked rice were sold to visitors from all over the country, making bamboo crafts popular as souvenir items. The production of bamboo crafts continued to increase and a local weaving industry became well established. In 1902, with the founding of the Department of Bamboo Basket Crafts in the Beppu Technical Apprentice School, Beppu bamboo crafts were acknowledged as not just souvenirs, but as high quality products of excellent craftsmanship. In 1967, the weaver Shounsai IKUNO was appointed as the first Living National Treasure for bamboo crafts. Steps were taken to ensure the handing down of advanced skills. In 1979, Beppu bamboo crafts were designated as Japanese traditional craftwork by the Ministry of Economy, Trade and Industry and can be enjoyed as both daily use items and art pieces.

See items made in Oita