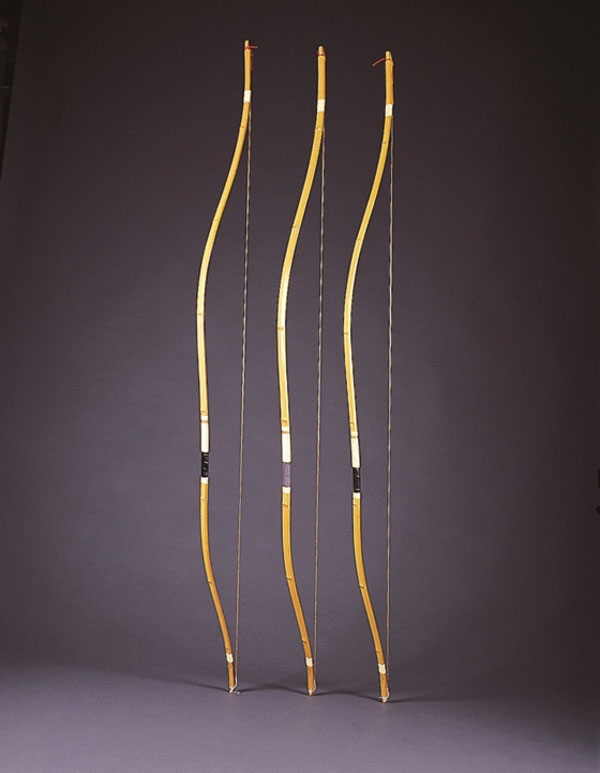 What is Miyakonojo archery bows ?

Miyakonojo Bows (called Miyakonojo Daikyu in Japanese) are bamboo archery bows produced in Miyakonojo, Miyazaki prefecture. The Miyakonojo area is known for growing high quality bamboo and has produced a variety of weapons like wooden swords as well as bows from a long time ago. Currently, the area produces about ninety percent of all bamboo bows in Japan, and being the foremost production center, hosts an annual national kyudo (Japanese martial art of archery) competition. At two meters of length, this craft's longer style of bow increases accuracy and range, contributing to its quality reputation throughout the nation. Having a buckskin grip decorated with beautiful patterns, Miyakonojo bows are not only excellent as weapons, but they also have a great presence as an artistic Japanese bow. They are both beautiful and practical.

Bows were originally made as weapons during times of continuous conflict such as the Sengoku period (1467-1603) and later, in more peaceful times, the practice of archery became a martial art. With its abundance of bamboo, Miyakonojo is considered to have been producing bamboo crafts other than bows, but unfortunately, there are no existing historical records chronicling the beginning of bow-making in the region. However, a description of bow production in the Miyakonojo area can be found in a document called Shonai chiri-shi (Geography of Shonai), compiled in the late Edo period (1603-1868) by the lord of the Satsuma domain (includes the Miyakonojo area and present day Kagoshima prefecture). This document confirms that bow-making was already thriving in Miyakonojo in the Edo period. It is also recorded that kyudo (Japanese archery) was popular in the domain, which led to high demand for the bows and protection by the Satsuma domain of Miyakonojo bow production. As the Meiji period (1868-1912) began, a bow maker named Zenji KUSUMI introduced even better production techniques from Kagoshima, improving bow-making techniques and earning this craft a national reputation. In 1994, Miyakonojo bows were designated as a traditional craft and the skills have been continuously handed down into modern times.

See items made in Miyazaki