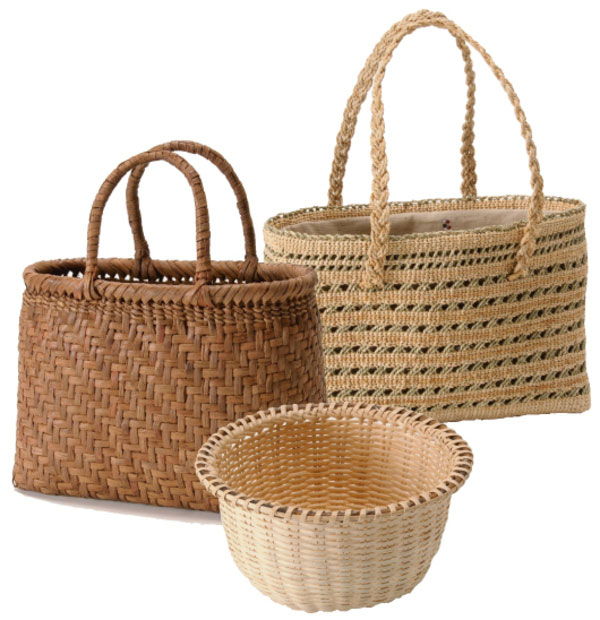 Traditional crafts and techniques
made from natural materials

Okuaizu Basketry, called Okuaizu Amikumi Zaiku in Japanese, is basketry produced around Mishima Town, Onuma County, Fukushima Prefecture. As this mountainous area in the Okuaizu region has much snow and farmers are unable to work in the fields in winter, the craft of basketry has been handed down from olden times as handwork during the snowy season. There are three different types of products each made from plants growing in this region; the hiroro crafts made from carex multifolia, yamabudo crafts made from crimson glory vine, and matatabi crafts made from silver vine. Okuaizu Basketry is distinguished by the use of local natural materials and their superb hand-weaving, which although simple, has a distinctive delicacy. As for hiroro crafts, hand baskets, large baskets, and shoulder baskets are made by fine-weaving the carex multifolia into a finish resembling lace stitches. For yamabudo crafts, robust baskets and confectionery bowls are made with the tough crimson glory vine. For matatabi crafts, cooking utensils are mainly produced as silver vine baskets are pleasant to the touch and can make good strainers. Okuaizu Basketry is a traditional craft embodying the spirit of the art of craftsmanship, in which local people in harmony with nature make the daily necessities of life.

Fragments of simple basketry and rope were discovered at the Arayashiki archaeological site in Mishima Town, proving that such skills and techniques already existed in the area as far back as the Jomon period (14,000 to 300 BC). More recently, in old documents such as the “Aizu Nosho (Book on Agriculture in Aizu)” written in 1684 and “Toyu Zakki (Record of Journey to the Ou Region)" in 1788, descriptions of basketry can be found; although the origins are not clear, it would seem Okuaizu Basketry items have been made on a daily basis in this region for at least several hundred years. The skills have been handed down to present, but during the late 1960s, due to an aging population, the number of basket weavers decreased. Mishima Town was concerned that if nothing was done, the craft would be lost. Aiming at the establishment of a local industry, the town embarked on a movement to promote the use of such handcrafted utensils and baskets on a daily basis. This campaign has spread throughout the region over the years and at present, more than 100 artisans are keeping the skills and techniques of Okuaizu Basketry very much alive.