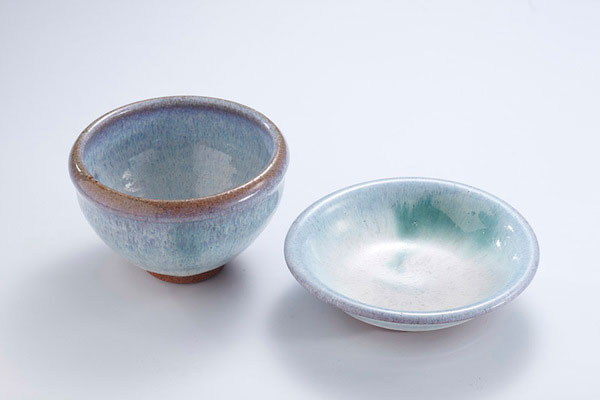 What is Aizu-hongo ware ?

Aizu-hongo ware (called Aizu-hongo yaki in Japanese) is a traditional handicraft from the region of Aizu in Fukushima prefecture with a history of about four hundred years. This pottery, which is thought to have originated during the Sengoku period (1467-1600), was patronized and promoted by the lord of the Aizu domain (now the region of Aizu) at the beginning of the Edo period (1603-1868). Then various pottery operations launched independent production due to the dissolving of the magistrate’s office and each place produced pieces in its own unique style. Aizu-hongo ware includes both ceramics and porcelain and there are pottery places specializing in either porcelain or ceramics, as well as those producing both.
The differentiating feature of Aizu-hongo ware is its varied types of decoration including blue paint called asbolite, other traditional Japanese paints, and paints from the West.
Many practical use ceramics are produced using traditional enamel. There are many styles, such as celadon* porcelain, white porcelain, and carbonization, as well as different finishes (glossy and non-glossy) and textures.

Production of Aizu-hongo ware is said to have originated in 1593 when the military commander, Ujisato GAMO, became lord of the Aizu domain, and roof tile production was commissioned while restructuring what is now the Aizuwakamatsu Castle. Consequently, at the beginning of the Edo period, Masayuki HOSHINA, the head of the Aizu-Matsudaira clan relocated potters from Owari (today the western half of Aichi prefecture) to begin full-scale production. The production of ceramics and porcelain grew with support from the domain. However, the industry would face two difficult periods due to the effects of war. At the time of the Boshin war (civil war, 1868-1869), potters left to fight in battle and porcelain factories were burned down, forcing the industry into a state of inactivity. Afterwards, all of the villages united their production activities and the craft recovered to such an extent that by the middle of the Meiji period (1868-1912), its products were being exported to the West. In 1916, most of the porcelain factories were destroyed yet again in a large fire, putting the industry in a dilemma, but once again it recovered well.
Thus Aizu-hongo ware has overcome periods of upheaval to continue its long history without being stamped out. This craft has become widely known as a form of ceramics and porcelain that has simple beauty and ease of use.