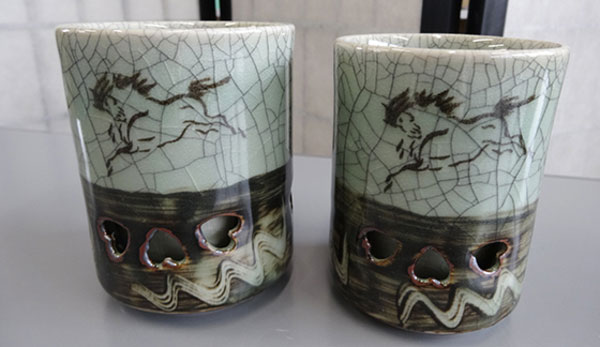 What is Obori-soma ware ?

Obori-soma ware (called Obori-soma yaki in Japanese) is a form of porcelain produced around the town of Namie in Fukushima prefecture. This craft uses blue porcelain enamel which is made from locally collected grindstone.
The distinctive feature of Obori-soma ware is its pattern of blue fissures. On a glassy surface of celadon* porcelain glaze, these blue cracks cover the entire piece. A difference in the shrinkage rate between the raw materials and enamel causes cracks to occur when baking. At that time, a beautiful cracking sound can be heard. Then, pictures that depict the sacred horses revered by the former Soma domain (located in eastern Fukushima prefecture) are hand-drawn on the pottery. The craft is double-fired, so the inner layer of Obori-soma ware insulates hot liquids for a long time, while the outer shell prevents anyone from burning their hands. This double-firing technique is not seen in any other type of porcelain and is performed with user-friendliness of the product in mind.

Obori-soma ware is said to have originated at the beginning of the Edo period (1603-1868) when Kyukan HANGAI, a warrior of the Nakamura domain (modern day Fukushima prefecture), discovered potter's clay in the Obori region of what is today the town of Namie, and ordered his manservant to produce pottery for his daily use. While the Soma Koma-ware produced near Nakamura Castle, city of Soma, was gifted to the feudal lord, Obori-soma ware also became popular with the masses as daily tableware. At that time, the Nakamura domain was encouraging the production of ceramics and porcelain as specialty products. In the latter part of the Edo period more than a hundred pottery operations were created, most of which prospered. The market extended from Hokkaido to the whole of Kanto and the ceramics industry underwent large expansion.
As the Meiji period began (1868-1912), the abolition of feudal domains and the introduction of prefectures led to the abolition of the Nakamura domain, which meant that the domain's patronage of Obori-soma ware ended and by the Taisho period (1912-1926) the number of pottery operations had dropped to thirty.
The Second World War caused production to decline, but today there are twenty five pottery businesses enthusiastically producing Obori-soma ware with the traditional techniques.