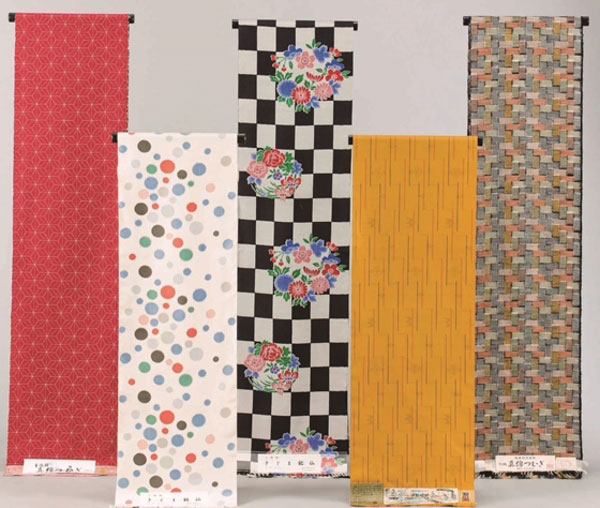 What is Isesaki traditional resist-dyed textiles ?

Isesaki Kasuri is a type of woven fabric produced in Isesaki, Gunma prefecture. Mainly used for kimono, this fabric has been admired for its texture since ancient times. Today, neckties and shop curtains called noren in Japanese are also produced. The more the fabric is used, the more the kasuri patterns* improve in appearance, as it gains richer shine and deepness in color. Isesaki Kasuri uses the following dyeing techniques: kukuri kasuri, itajime kasuri and katagami oshizomekako kasuri of which almost all of the processes are done by hand. The city of Isesaki has been successful in the sericulture industry for centuries as they had good soil drainage and the environment was suitable for growing mulberry trees. From an ancient burial mound in Fuchina, a piece of woven cloth estimated to have been created during the 6th century was found, proving that the history of the woven textile was more than 1200 years old. Also, it is recorded in the Nihon shoki or The Chronicles of Japan, which was completed in the year 720, that a textile called Ashiginu was presented to the Imperial Court. In Isesaki there is the Shidori Shrine, dedicated to the god of woven fabrics, and Akagi Shrine, dedicated to the ancestral weavers, showing how valued the weaving industry is to the city.

*A kasuri pattern, also known as ikat, is precise patterning that result from a technique of warp tying when dyeing.

During the early 18th century, cities bristled with silk markets which is where this textile started to be sold as a product. At these markets, designs like Isesaki shima and Isesaki futori were established as popular products. The increased demand for woven fabrics boosted the number of farmers who engaged in weaving, and growth accelerated with the establishment of motohataya, weaving shops that focused on the finishing process. After the development of a weaving technique regarded as the origin of Isesaki okasuri in 1847, this craft became even more beautiful through repeated improvements in the production process. During the late Meiji period (1868-1912), mechanization led to the golden age of production. After postwar reconstruction, Isesaki Kasuri revived production and was designated as a traditional craft in 1975. Today, an event called Isesaki Meisen Day is held every year in March, maintaining its recognition.

See items made in Gunma